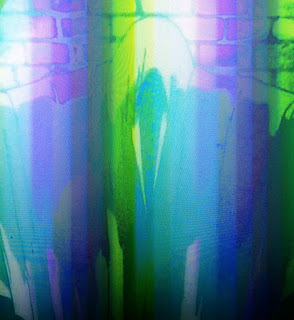 Ryan Harris is a film score composer and music producer from Jacksonville, Florida. His latest release "Demons In The Dirt" is very emotional in tone, and cinematic in scope. Inspirational elements from Morricone, Carpenter, Ash Ra Tempel, Max Richter, and Brian Eno can faintly be identified throughout the album, like mirages in the summer heat. Look for our full review of the album soon. Ryan shares some of his favorite tracks in this weeks edition of "Five For Friday" but first enjoy a brand new track from him called "Washed Out" and explore more of his music at ryanharrismusic.bandcamp.com .

I don't know much of anything about Poolside, other than I've not found another song of theirs that really sounds like their incredible cover of Black Sabbath's classic, Planet Caravan. I'm not a huge Sabbath fan. I get why they're so well-regarded these days, but outside of Vol. 4 - I really can't get into their sound because of Ozzy's vocals. All that out of the way, Poolside does an excellent job of creating a chill-out vibe from such a well known rock tune. Tropical doom might be a newly created genre of music thanks to this song! While it is very reminiscent of Tiedye's tropical house cover of Metallica's Nothing Else Matters, Poolside create an atmosphere of psychedelic relaxation that I wish every tropical destination really sounded like.

Wreck & Reference's Want, released last year on the incredibly bold Flenser Records, has been on my turntable at least twenty times since I received it in the mail. The entire album is full of desolation, frustration, agitation, and beauty. Bankrupt has always been my most favorite track since the first spin. The influences of black metal, industrial, and post punk musics really shine through, but not in obvious ways. This song has the most raw vocals I've ever heard. Maybe not the loudest, heaviest or most aggressive - but the most emotionally distraught and powerful album I've picked up in the last few years, and this track really shows off it's dark, minimalistic beauty.

Maybe it's the speed of the music, maybe the dances, or perhaps the masks - I don't know what it is that causes me to put the Tshe-Tsha Boys on repeat, but I cannot get enough! Nwa Pfundla is the perfect example of Shangaan Electro: exciting tempos unmatched since happy hardcore, playful native African vocals, and such infectious dances that will keep you glued to Youtube. I might be a couple of years late to Shangaan, but damn is it addicting regardless. This is much that will make you smile, sit back, and just enjoy. It isn't serious or emotional, but it isn't meant to be. Look at all the smiling faces in the Shangaan Electro videos and try not to smile by the end of the first video you watch.

Vision Heat - Drive to The Dome

When I first read about Vision Heat, it was stated that they were yet another John Carpenter-inspired band. I'll admit, I've created about 100+ songs in my own musical explorations that were Carpenteresque since probably 2001 or so, but damn am I getting tired of all the albums being released as comparisons to his soundtrack work. Because of that comparison, I actually didn't check out Vision Heat for a while. I'm glad I gave it a chance after a while of trying to avoid it, because it is much more like the soundtrack to a B movie I would have watched on USA's Up All Night in 1990 than a Carpenter film score. Grainy VHS visions of horror, crime, and the big city. Drive to The Dome is my favorite track on the album because it is just reminds me of a fading, degrading VHS tape sounded like when I tried to play it for the 100th time. Not the fake, digital effects thrown over videos nowadays to make them feel retro. I'm talking about my many homemade VHS complications full of Rescue 911, WCW, Camp Candy, Unsolved Mysteries, and Saved by The Bell. Out of all the faux-retro music - Vision Heat is by far one of the best out there.

I've always been a sucker for modern classical music. Max Richter, Johann Johannsson, etc. That music just gets me every time. I believe it's because it is the music I wish I was talented enough to create. Awe-inspiring music that could fill cathedrals and score scenes of falling snow at the same time. True cinematic music. Erased Tapes just released Michael Price's first full solo album, and it is wonderful from start to finish. The Attachment is a tear-jerker of a song, with the loneliest and yet some how powerfully striking string arrangement. It was such a strong standout track when spinning the album, I've since played it several times while at work to clear my head. I have a feeling a lot of people will overlook this album, but hopefully if they hear the sadness and strength in The Attachment, they won't make that mistake.