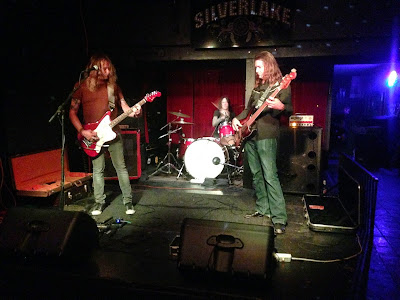 Leaf is an LA based band made up of Mark Starr, Phil Shelly and Chris Baer. Heavily influenced by 90's alterna-rock and shoegaze LEAF has released two impressive singles and just finished recording an E.P. with Steve Kille (Dead Meadow, Pink Moutaintops) set to be released soon. Enjoy the bands picks for this weeks edition of "Five For Friday", but first have a listen to the fuzz drenched sounds of their track "Wait Until".

What can I say about Dinosaur Jr but pure genius!! Hard to pick just one song. Since my youth as a punk/hardcore kid Dinosaur Jr have been a huge influence. J Mascis is a guitar god!! His sound and tone are brilliant. So brilliant I own his Jazzmaster signature copy. Also have taken his tone too (at least I'd like to think so). I picked this song because for the time (of its release) it just rocks!! It's poppy,catchy and noisy!! I love these guys and I have yet to hear a bad album!

Can't explain the feeling I had when this album came out. I just know I couldn't stop listening to this album! I can't stop listening to it even now. I picked Rave Down because it has the power of driving riffs to a lazy shoegaze power that makes you want to drive throughout the night and not care how far you go.

When I first heard these guys I knew that this was a band to be excited about, Then "Loveless" came out. What a great album, from start to finish!! The guitar sound and tones that Kevin Sheilds created are some of our (Leaf) biggest influences.Who cares how long it takes to release My Bloody Valentine records... well I guess I do!! I wish they would put out one every year but maybe waiting is worth the wait. Hard to pick just one song off of Loveless but I picked "Soon" because it has a pop sense and drone to it that keeps you wanting more!! The layers and noise to dance beats just bring the perfect song to a more perfect record.

It's simple, lo-fi and well written with clever lyrics!!

Is to me the hypnosis for the ears. From the way the song comes in, with airy acoustic guitar topped with a warm tremolo and the drums come in loud and abrupt,followed by a rolling bass line that slowly progesses I just cant help but get completely engulfed in this song. There is so much randoness going on in the background that I love as well...strange acoustic guitar, looped and heavily delayed vocals. The lyrics almost hope for an easier time at the same time evoking thoughts of death. I love the spacious breaks in the song with sustained and panning guitars, leading up to a strong rhythm hit when the song comes back in. Even though this song has so much going on it still feels like it has so much room to breath. It ends with some burried guitar and a wild scream. To get the full effect throw on some headphones and put this one on loop!!!