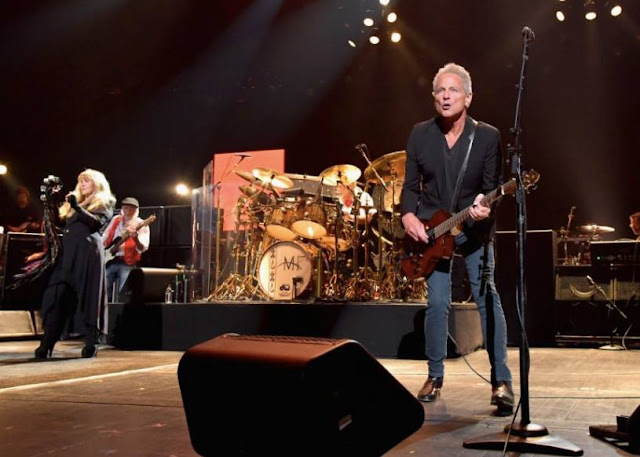 On January 26th at Radio City Music Hall, Fleetwood Mac became the first group to receive the Musicares "Person Of The Year" Award. MusiCares provides a safety net of critical assistance for music people in times of need. MusiCares' services and resources cover a wide range of financial, medical, and personal emergencies, and each case is treated with integrity and confidentiality. MusiCares also focuses the resources and attention of the music industry on human service issues that directly impact the health and welfare of the music community. On this particular evening over 7 Million Dollars was raised for this tremendous organization that does so much for so many people.

A large group of musicians including HAIM,Harry Styles, Zack Brown Band, Miley Cyrus, One Republic, Keith Urban and others gathered to honor the legendary band known for such chart topping albums as "Rumors" and "Tusk". My favorite performance of the evening was Lorde's take on the bands classic B-side "Silver Springs".

Soon Fleetwood Mac would gather on the stage to receive their award which was highlighted by a very emotional speech from Stevie Nicks were she reflected on the loss of fellow musician and close friend Tom Petty who was Musicares Person Of The Year in 2017. “The loss of Tom Petty has just about broken my heart,” she said, gesturing to his daughter Adriana, who was in the audience. “He was not only a good man to go down the river with, (as Johnny Cash once said about Petty), he was a great father and a great friend ...he was one of my best friends. My heart will never get over this. He was honored at MusiCares last year and he spent a lot of time after that night talking to me about how important it was to him. And maybe he was talking about it because he was ill. He fought his way through that last tour — he should have canceled and gone home and gone to the hospital. But not Tom, he was gonna go down that river. So, God bless him, he finished his tour at the Hollywood Bowl with three shows, and one week later he died. But he got down the river.” “So Tom, I know you’re standing next to me. As you always have been for so many years. And he loved MusiCares.”

Harry Styles then joined the band for a rendition of "The Chain" which was followed by an exclusive Fleetwood Mac 4 song mini set which included "Little Lies", "Tusk", "Gold Dust Woman" and "Go Your Own Way".

Posted by Custom Made Music at 1:00 PM