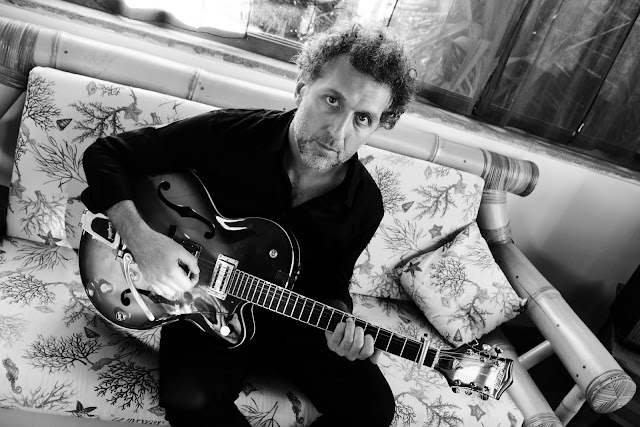 Shining Dust is an Electropop project founded by musician Alessandro Vitalon in Milan in 2013. His debut album "Mirror" (available now from Seahorse Recordings (www.seahorserecordings.com) mixes electro-pop, and trip hop with elements of 80's inspired new wave. We sat down with Alessandro to talk about his early musical influences, how Shining Dust started and the writing and recording process of "Mirror".

CMM-What are your first musical memories and what bands/artists made the biggest impact on your musical style?

Ale-I remember my first concert in Milan! It was the Glass Spider Tour by David Bowie in the 1987! I was 14 years old and thanks to David I learned what makes a perfect live show and how I should play on stage and last but not least that a live concert is first of all a big show for people watching you…not only a show for yourself! I remember “The Joshua Three” by U2 as a beautiful album that introduced me to the New Wave music genre that still today represents the roots of my music style. I also remember when I listened to “Smells Like Teen Spirit” for the first time and I said to myself “wow…such an amazing sound and energy like nothing I have ever heard before!!!”. I think Grunge was the last music revolution around the world because of its message and social impact.

CMM-When did the band form and who makes up the current line up?

Ale-Shining Dust was born in 2013 as the natural evolution of my first dark wave band Aqusha. I was the founder, singer, guitarist and bassist of Aqusha with which I played in some popular Live Club in Milan like Tunnel and Alcatraz. When I finished my music experience with Aqusha I started Shining Dust as a one man band.

CMM-What was the song writing and recording process of your new album "Mirror" like? Any particular inspiration for the songs?

Ale-I record my songs in my home studio. My song writing process usually starts with a new sound I create with my DAW and with a very simple chord sequence I can play with a keyboard or my guitar. Another way is when I listen to a beat loop or bass chords in my mind and I quickly record them with an ipad or my DAW. Once I have some of the instruments recorded I start to listen to the instrumental base and try to sing over it with some melodies and lyrics inspired by the music. The main inspirations for my music are some of my favourite genres like electropop, trip hop and new wave. My lyrics are inspired to Shining Dust Philosophy: only through the full consciousness of our dusty condition as human beings in the universe can one reach the shining or the happiness. You can read the details of Shining Dust Philosophy on my WebSite: www.shiningdust.com.

Ale-Most of the songs were made recording audio tracks like bass, guitar and voice and recording MIDI tracks like keyboards, sound FX and drum machine. Some songs like Magic and LIgereza were all made and recorded with my iPad inspired by some special trip around the world.

CMM-If you could do a a film score for any film director who would it be?

CMM-What is the music scene like in Italy right now?

Ale-It's a very difficult scenario for independent musicians in Italy right now because it’s very hard to have visibility, promotion and some chance to play live if you make your own music! The Major Labels are leading the music industry in a very strong and monopolistic way spreading around the country only q few artists playing mainstream pop music. There are many great indie artists offering great electronic music but they don’t have any chance to become popular and or reach many people.

Ale-No touring or shows planned for the coming months because up to now this is not my priority. Currently I’m working on promoting “Mirror” around the world on the web through Radio, Blogs and Magazines and I'm studying audio engineering to become a good music producer. I've been producing some very interesting US artists right now. I'm also starting to compose some soundtracks for fashion parade here in Milan and next year I’m going to start working on the new album.

Posted by Custom Made Music at 4:02 PM