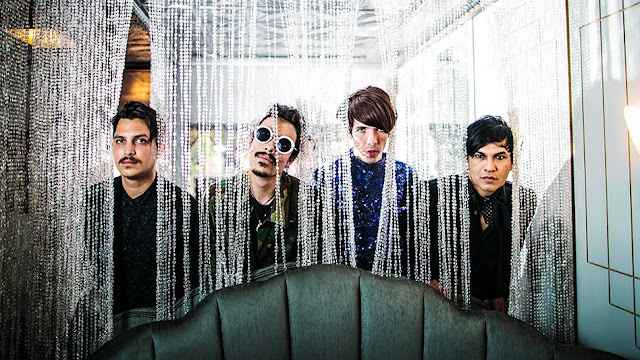 Brooklyn based band Lazy Queen combine elements of shoegaze and psych with garage and punk sounds to create a vibrant blend of reverb drenched rock n roll. We sat down with Vocalist/Guitarist Henrik Soeberg, Guitarist Reyson Morales and Bassist Julian S to discuss the formation of the band, the making of their debut E.P. "Drift", and their recent tour of Puerto Rico. You can pick up all of the bands music at lazyqueen.bandcamp.com

CMM-How did Lazy Queen get together and who all makes up the band?

H: Well, Reyson moved to New York from Puerto Rico about six months before I met him. I had moved to the city from Norway a couple years before for school. We started playing together a little over two years ago. In the beginning we treated it more as a recording project where we’d play and record all the instruments ourselves in Reyson’s Harlem apartment. But when our music started getting around and we were offered gigs, we found ourselves in need of either a cloning devise or some actual band members. The technology just wasn’t there so we settled with band mates. Starting with Julian…

J: I came in as a temporary replacement, but quickly set up camp in their hearts, and I’ve stayed there ever since.

H: Currently our friend Duke Taylor finds himself behind the drum kit, and we’re happy to have him there.

CMM-You all draw influences from shoegaze, to 90's alterna-rock to punk. What bands did you all really get into growing up and who made the biggest impression on you all as players and songwriters?

J: John Frusciante really got me into home recordings and songwriting, as well as experimenting with instruments. I'm not very dexterous but I think I like to play around with different sounds like slides and strums on the bass that I think if it weren't for a lot of the post-punk bands I used to listen to, and John Frusciante, I wouldn't even care to try out.

R: I mostly grew up listening to punk and metal bands in my early youth ‘cause that's what most of my friends were listening to in PR. But later on I discovered British post punk and new wave bands like Jesus and Marry Chain and Echo and the Bunnymen and was captivated by the intricate guitar lines, atmospheric noise and melodies. Then came newer Brit pop bands like Blur, Pulp, Suede, Ned's Atomic Dustbin, Ride, Chapterhouse etc.

H: I’m not ashamed to say that I started picked up the guitar in my youth to learn to play Green Day and Blink 182 songs. In terms of influences today, and for most of my latter teen years, I have my usual suspects that I’ll return to frequently like Nirvana, Pixies, Sonic Youth, My Bloody Valentine, sprinkled out with whatever is the current obsession. Right now I’m not able to stop listening to Single Mothers from Ontario. Loud and dirty is the name of the game.

CMM-The bands debut E.P. "Drift" is available now on Seattle label Pacific Trash. What was the songwriting and recording process of the E.P. like? How do you all approach putting together the bands songs?

H: Most of the songs were written throughout a three-month period last winter, with the exception of "Lesion", which is one of out oldest songs that we just never got around to recording. For most of the songs Reyson and I will bring in a skeleton and then we’ll all lazify it together. And eventually I’ll get around to writing some words and vocal melodies for it. The release was recorded at 1989 Recordings in Bushwick over a couple of really fucking long nights. The songs were pretty much all recorded live with all of us playing together to capture our live energy. Then Reyson and I would record a layer of guitar noise each for texture. We wanted to create a full sound, without it sounding too produced or tampered with.

J: All I'm gonna say is, it was damn exhausting getting out of work at 6pm, picking up gear, having a dollar slice or two and heading into the studio for a zillion hours on a weekday, wake up and do it all over again. So worth it though.

H: I have some great pictures of Reyson sleeping with a beer in one hand and a cigarette in the other, while listening to me scream in the vocal booth through a pair of huge headphones.

CMM-Any particular gear you guys used when making the record?

R: I have this amazing fuzz with a loop switch called Absynth, and also the Electro-Harmonix Holy Stain, both of which played a big part in molding my noise textures and sound throughout Drift. 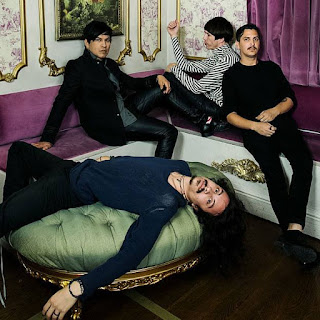 CMM-Being in Brooklyn you get to check out new music all the time. Any new bands and stand out venues you all can recommend?

H: We definitely have to recommend our talented friends in LADY. They keep getting better every time we see them.. Which is a lot.

J: In terms of venues, our collective favorite is The Gateway! It’s run by local musicians that really care about the local music scene and put a lot of hard work into creating a place for that exchange to happen. The backline is great and the people that work there are amazing. Venue crush. As far as other live acts around town, WALL has been a great experience (what’s up with all these caps names) and so has Future Punx, Uniform.

H: And Vomitface, Big Ups, Dead Tenants and Hunters.. I mean, in general there’s pretty much a great show to see everyday.. I think we’re spoiled.

CMM-How was the recent tour of Puerto Rico?

J: The vibe down there is just so different. I loved that almost everyone was dancing and just having a great time. Though I'm never driving these punks around again. We need an intern.

H: We quickly learned that one third of this group is a terrible backseat driver...

R: It was so incredible to play back home coming with a band from outside of PR and see the shows packed, when just a couple of years ago I was playing there and was part of the small but very vibrant indie scene. It was really great to see the kids follow us to all the shows, four days in a row.

H: As the only non-Puerto Rican of the group what struck me the most was how engaged the audience was compared to what we’re used to back in Brooklyn. People actually physically express their feelings for the music. Showing too much passion for anything isn’t cool anymore back home. You’ll look out into the audience and be met with a bunch of blank stares and crossed arms. If somebody nods their head along to the music you’re like, “oh shit, he must LOVE us.” Then after the show they’ll come up and give compliments, but it’s like “why the fuck didn’t you move around a little then.” And I mean, this is a general feeling as both a performer and someone who goes to a lot of local shows. So the feeling of the music, the performance and the way the energy felt like a mutual exchange and shared moment between the band and the audience, which is why I first wanted to play music in the first place, stood out a lot down there.

CMM-If you all could do a film score for any director who would it be and why?

J:I think I watch too many movies to be even able to decide. I feel we work very well between noise and melody. Jodorowsky's escalating craziness would be awesome to score (since this is all hypothetical and all). If we could work with Danny Boyle's calm vs. chaos contrasts I'd die a happy musician as well. 28 Days Later is one of my favorite films.

R: I’d pick Guillermo del Toro, not only cause his films are amazing, especially Pan's Labyrinth, but also cause I could totally identify musically with the moods and imagery he creates.

CMM-What's next for the band? Any new recordings or upcoming tours?

H: We’ve already written some new songs and are working on more. Hopefully we’ll be back in the studio sometime this spring. Other than that we are currently putting together a West Coast tour with LADY that’ll take place at some point this coming summer.