"Dream Pop Sway" An Interview with The Cordial Sins 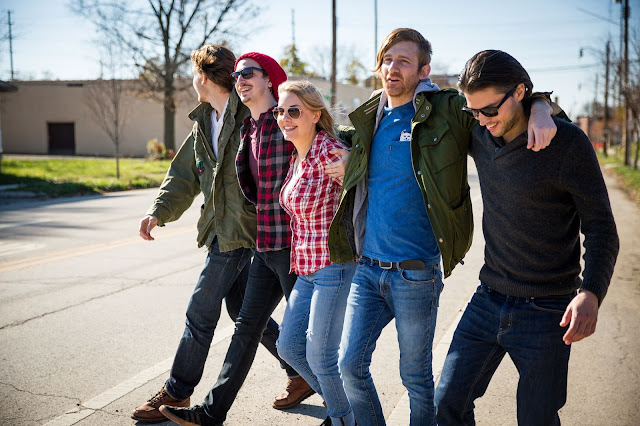 The Cordial Sins are an Alternative/Indie/Dream-pop band based out of Columbus, Ohio. In November 2015, the group released their first, full-length album, “Daze,” which will also be released on cassette February 5th by CMM. We sat down with Vocalist/Keyboardist Liz Fisher and Guitarist Corey Dickerson to talk about their early musical inspirations, the making of the album, and the current Columbus scene, but first have a listen to their single "Dangerous State".

CMM-It seems like you all have been playing music in various bands and projects for a long time. What brought The Cordial Sins together and who makes up the band?

Liz-This past year we were really able to solidify our line up. It includes myself on vocals/keys/violin, Corey on guitar/vocals, Kyle Edwards on guitar, James Weaver on bass, and Jeremy Miller on drums. Corey, Jeremy, and I have been performing together for a few years and finally feel as though we've found some solid ground as far as band members, which I think is reflected in the sound of our record.

CMM-You all describe yourselves as an alternative rock/dream pop band. What bands really inspired you all when when you were growing up and what artists made the biggest impact on you?

Corey-Growing up, I really enjoyed listening to The Beatles, Fleetwood Mac, Pink Floyd -- the classics. My teenage years consisted of listening to Nirvana, Queens of the Stone Age, The Strokes, and other various artists. As far as recent years go, and what we believe inspires our own music, I'd say that we stem from artists like Broken Bells, Danger Mouse, Real Estate, Deerhunter, and others on that side of the spectrum. I definitely feel like each player brings their own influences and style to the table, which has allowed us to be unique and accessible at the same time.

CMM-The band recently released a new album called "Daze". What were the songwriting and recording processes for the album like?

Liz-When we started gathering material for the album, we were still finalizing some line up changes. In order to be as productive as possible, Corey and I would write the overall skeletons of the songs (like "Goodbye", "Dangerous State", and "Sway") and then present them to the rest of the band. As we moved forward, however, we tried different approaches, which mostly meant allowing Jeremy (drums) and our bassist at the time, Alex, to really feel out the pulse of the song. From there, we'd layer guitars, keys, and vocals on top. I think both approaches allowed for some really great songs, but you can hear the differences I suppose.

CMM-Any particular gear you all used when making the album?

Corey-We did a lot of experimenting with what we had and tried to do some research, as well. Remember, at this point, we've made it through a big line up and sound transformation, so it was our chance to really define ourselves. I really wanted to use a lot of reverb, delay and chorus effects, which I found easiest to do using the Eventide Time Factor pedal. I also used my '95 Epiphone Sheraton II on the majority of the songs. Our other guitarist, Kyle, used an American Stratocaster for almost all of the rhythm parts with a lot of tremolo and delay effects through the Modtone Tremor and a Boss Digital Delay pedal. We also used multiple amps at our disposal at The Oxide Shed, which was an awesome experience, by the way. Some of these include a vintage Fender Bassman, a Vox AC-15, a Fender Bluesman, and a Limited Edition Fender Hot Rod Deluxe III. Liz uses a Roland GAIA Synth and a Nord Electro 2, both of which we used on almost every song. She also wrote, arranged, and performed all of the strings using a Liquid Violin (electric) and an acoustic violin. There was obviously a lot of other gear, but those really make up the bulk of different sounds we were going for. 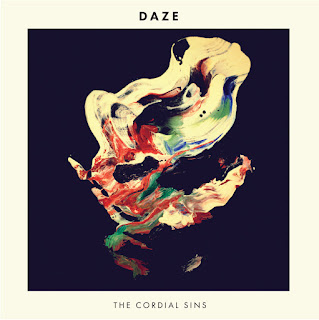 CMM-The cover art for "Daze" is quite striking. Who put that together and what was it's inspiration.

Liz-Well, we were really stressing to come up with some album art. At this point, the clock was ticking and we really had no good leads. Luckily for us, this artist, Steve Demyan, started following us on Instagram. Thank God he did, too, because he creates some breathtaking artwork. We found out he was living between Brooklyn and Columbus and thought we'd go out on a limb and ask him to do the album artwork. He agreed and was able to get it ready within a few weeks, which we think was a random act of fate. All we had to do was tell him which of his pieces we enjoyed most and from there, it was up to his own creation. We decided we wanted the outside to be dark and the inside to contrast that, while maintaining the same color scheme, which he did really well. Once we received his work, we asked our friend, Joshua Trippier, to design the album -- selecting a font, putting together all of the track-listing and credits, etc. Both Steve and Josh really pulled through for us and did an excellent job. We really believe that album artwork is such an important part because it's a first impression for anyone who doesn't know you. So, we are really happy with the end result.

CMM-If the band could work on a film score for any director who would it be and why?

Liz-Hands down, Quentin Tarantino. We're all really big fans of his work and he always has a variety of music in his films. We're all about variety.

CMM-Columbus Ohio has always been know for a great DIY music scene. What are some new bands you would recommend checking out from the area and how would you describe the current scene in Columbus?

Corey-I think that, compared to a lot of people like Saintseneca and The Receiver, we're relatively new to the music scene. During our time here, however, we've gotten to know a lot of amazing bands, many of which we're friends with. A few that immediately come to mind would be The High Definitions, who are also recording at The Oxide Shed, Playing to Vapors, Friendly Faux, Bummers, The Worn Flints, Turtle Island -- just to name a few. It seems like the music scene here is a little over-saturated at the moment. I hope that a lot of the bands that are "on the rise" here in Cbus will do what they can to branch out as to make room for even newer bands. That's what we're aiming to do the next few years

CMM-What does the band have planned next? Any tours or plans for new recordings?

Liz-I think (and hope) this year will be a big one for us. We are planning to branch out, as mentioned earlier, and do some small touring. We'd also love to play on many of the festivals and events that Columbus and other areas of Ohio offer. We like to keep our performances fresh and will continue to push the album while also coming up with new material. I'd say that people could expect some new material later this year. At this point, it's a lot of planning, organizing, and getting ourselves out there as much as possible and in any capacity that we can. We also plan to have fun!

Posted by Custom Made Music at 9:10 AM