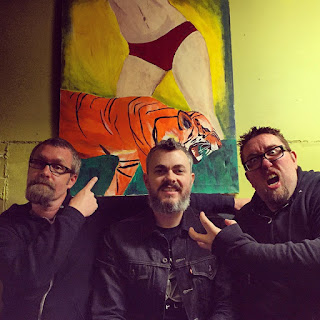 SHE RIDES TIGERS is a raucous three-piece rock band from Chicago that is crafting dangerous rock&roll music, both raw and visceral, on the verge of crumbling beneath its sonic weight. Consisting of Joe O’Leary (guitar, vocals), James Scott (bass, vocals) and Matt McGuire (drums), The band delivers their own brand of fuzzed-out psychedelic rock and Americana with the devil-may-care attitude and melodic tendencies of Britpop. Their debut E.P. "Standing On The Edge" comes out June 20th. The band shares some of their favorite songs in this weeks edition of "Five For Friday" but first check out the video for their latest single "Roll With It"

The Smiths "How Soon Is Now"

Joe-I begrudgingly accept nowadays that I love this song and always have, though I wouldn't have admitted it when I was 16 and way into the punk rock scene. The song is both saddening and sexy at the same time, with some of the most brilliantly expressive guitar playing I've ever heard. Johnny Marr will always be one of my very top guitar heroes because he knows exactly how to balance pure artistic expression with absolute service to the song. It's his voice. Morrissey kills it on vocals of course, but Johnny does an amazing version of this song all on his own these days with his current band.

Joe-This sounds like a party. The huge, fuzzed-out funky guitar riff leads the charge and kind of sets the mood for this freak show of a song. The beat is super groovy yet huge. I can never get enough of this song and put it on anytime I get the chance to play DJ at a party. The singing is soulful and wild, and everything is kind of delightfully sloppy throughout. There's just something untamed and slightly dangerous to this sweaty unapologetic song that embodies everything rock&roll is about.

James-This is the first Barkmarket song that I was exposed to. Upon a friend's recommendation, I found a copy of the album L Ron and put it on in the car. From the first chord sliding around the twangy acoustic guitar and Dave Sardy's scratchy, pitch imperfect delivery, I was hooked and cranked the stereo. When the rest of the band kicked - in way too loud, it should be noted - I'm quite sure a speaker blew. My mind blew. All of the right buttons were being pushed and my teenage rage took over again. "Visible Cow" opened my eyes to embracing the slop, scratch, click, and bang in music, and I've never quite recovered from that first listen.

Burning Airlines "Outside The Aviary"

J. Robbins has been my musical compass for about 25 years now. This song perfectly balances the elements what I think make him such an important musician and songwriter. Punk rock roots, pop melodies, aggressive deliveries, a ridiculously tight rhythm section, and that bass tone. Oh, that bass tone. I'll be chasing that tone for the rest of my life. I'll buy anything that J. Robbins touches.

Pink Floyd "Waiting For The Worms"

Matt-This is probably the single song I can point to that made me want to be in a band. Its also cool we get to put up a video link because the visuals for this song are just as important to me as the song itself. I remember going to the Rock and Roll Hall of Fame with my parents on summer vacation as a kid and seeing this portion of The Wall in an exhibit. The image of the marching hammers was so earth shattering to me at the time. The song itself is bizarre and dark and unlike anything I'd heard before. I come back to this song a lot.