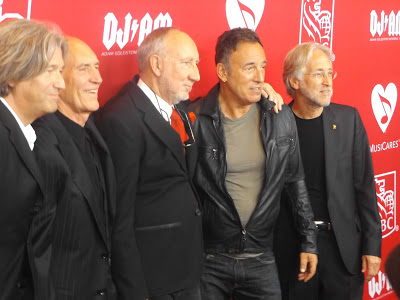 Springsteen presented Townshend with the Stevie Ray Vaughn award for his dedication and support to the Musicares Map Fund. He called Townshend "the greatest rhythm guitarist of all-time" and went on to tell an incredible story of seeing The Who as his first rock concert on their first U.S. tour opening for Herman's Hermits in the late 60's. Springsteen raved "The Who came out and they played for probably a little more than 30 minutes. Pete, in a cloud of smoke, demolished his guitar bashing it over and over into the floor and his amplifier." he continued "All I knew was for some reason this music and the demolishing of these perfectly fine instruments filled me with incredible joy and I never looked back". Springsteen said he was so blown away that it inspired him to try to duplicate their style as a 16 year old kid playing a High School dance with his band The Castiles. "I went out and I bought a smoke bomb and I bought a strobe light and I brought them to the gig." "At the end of the night, I lit the smoke bomb in the Catholic school basement, I turned on the strobe light and I climbed on top of my amp holding a vase of flowers I'd stolen from one of the upstairs classrooms,". "As the nuns looked on with horror, I reached up and smashed them onto the dance floor."

A grateful, humble and good spirited Townshend then came out to a big round of applause from the fans, friends and fellow musicians that made up the audience of over 2,000. He talked about experimenting with pot and acid in his art school days but said his real struggles where with alcohol. "I was doing like three bottles of brandy a day". "I think I don't look too bad for someone that drank cognac for fifteen years" which brought a rousing collection of laughs from the crowd. "But the secret for me to be able to do this tour with The Who, this 50th anniversary tour, and still kind of put on a reasonable show has been because of the 30 years I've been clean". 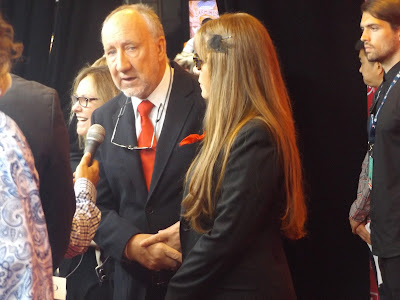 Daltrey, Townshend and Springsteen then bashed through "My Generation" highlighted by Pete's signature guitar playing and the undeniable presence of The Boss. Other stand out moments included Joan Jett's high energy performances of "Can't Explain" and "Summertime Blues", Willie Nile capturing the magic of "Substitute" and "The Kids Are Alright" and Billy Idol's powerful delivery of "The Real Me" and "Who Are You". Performance of the night went to Daltrey for his crushing rendition of Mose Allison's "Young Man Blues". The evening ended with everyone joining in on The Who classic "Won't Get Fooled Again". A truly incredible evening for such an important cause. 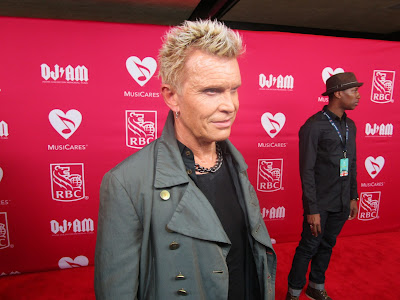 The European leg of The Who's 50th anniversary tour begins June 21st in Belfast and returns to the U.S. September 14th running through November 4th. For more information on Musicares visit www.grammy.org/musicares
Posted by Custom Made Music at 10:37 AM