Five For Friday with Christopher & Michael of Porch 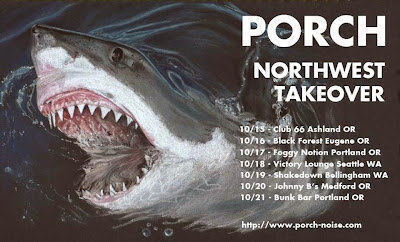 Having been at it for over 25 years, Porch have their share of indie cred. Guitarist/vocalist Todd Huth was part of the original Primus along with follow on projects Sausage and Les Claypool's Fearless Frog Brigade. Bassist Christopher Frey came from Today Is The Day and original drummer David Ayer beat it for Samiam before being replaced by Michael Jacobs in 1998. The band start a North West tour October 15th in support of their latest album "Walking Boss". You can get all the info on the tour dates at www.porch-noise.com Christopher and Michael took a break from their tour rehearsals to share some truly crushing music for this weeks "Five For Friday" feature.

Three "nice guys" from the MidWest...been described as "David Bazan fronting a more chilled-out, post-rock Jesu" for whatever that's worth. Also features one-heck-of-a-nice-guy playing bass guitar, Mr. Bobby Markos of Native fame. They actually have a relatively small internet presence so you REALLY have to seek them out. They're on tour RIGHT NOW so peep 'em if you can.

These guys SHOULD BE huge, though they may well be on their way there soon. Word on the street (from Jesse himself) is they are entering the studio in November w/ Mr. Albini to track their next full length. I recently witnessed several of these new songs LIVE and man, I hope your ear buds can support THAT kind of heavy! These guys quietly go about their business creating some very serious noise & touring their butts off, so catch them if they roll through yer town!

This almost feels wrong, like I'm hyping my own band...but alas. Our bros-in-arms from the Oaktown! Super interesting, textural, cerebral songwriting paired with killer tone! PLUS they're a TRIO (notice a theme here?). Having witnessed these guys throw down on more than one occasion, their shows are not to be missed! I personally am hoping for a new platter of goodness from these guys sooner rather than later, their last burner having been in heavy rotation around Casa Frey for awhile now. Porch is playing with them at the Elbo Room in SF along with Brubaker on Oct 24th.

Offshoot of Unsane with Chris Spencer that a friend of ours pointed us to recently. Their new record Dissent is fantastic. Music to drive your car fast to....

Oaktown Buds. They take instrumental math rock to another level. Great character and very unique. Ex-Monument to Masses and Turks. They have an awesome new record called Equal/Opposite and they are headed out for European tour in October. Check out bandcamp or their website for details and info.

Yes, there is a recurring theme here. Each of these bands are definitely great LIVE bands. So do yourself a favor and GET OUT AND SUPPORT LIVE MUSIC!

Posted by Custom Made Music at 7:16 AM