Five For Friday with Dedric Moore of Gemini Revolution 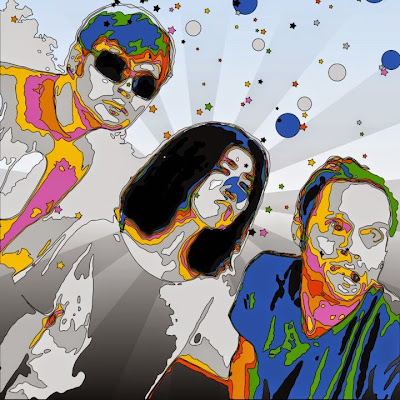 Gemini Revolution is an offshoot of the electronic collective Monta At Odds. Dedric Moore and Delaney Moore branched off with drummer Mika Tayana (who performed with John Zorn in NYC as she attended Berkley) to pursue sonic outer space explorations mixed with pop-leaning songs. The bands latest release "Synthesize" is the collaboration of four gentlemen surrounded by synthesizers creating an homage to the Blade Runner and 70s/80s science fiction soundtracks as fellow explorers Zach Bozich and Thomas Romero joined the brothers Moore to meld four minds into one collective synthetic conscience fueled by analog synths and vintage effects. Read on as Dedric presents quite an incredible collection of music for this weeks "Five For Friday" feature.

I saw Tim Hecker perform live in an old church at the 2012 POP Montreal festival. Tim Hecker sat in the choir loft and worked his magic as we sat on the floor in rapt awe and silence. Hundreds of people attentively listened while watching the moonlight cascade across the skylights. Hecker performed a version of Virgins months before its release. I was stunned and I still am when listening. Prisms started off the show and it still amazes me with its otherworldly synths and dramatic build.

Fila Brazilla were a huge inspiration to me and opened my eyes to making fantastic genre-stretching music that always had a wink and nod included. Maim That Tune was the album that set me off on my quest for weird groove music. My fav track was always Harmonicas Are Shite, which drops a harmonica into the mix just to prove the title wrong. But you should really give the whole album a spin or forward to the 54th minute if you must.

Alpha "For The Wages"

Alpha were one of those downtempo groups that wouldn’t fit the mode of “trip hop” so they lost out on the popularity created by Massive Attack and Morcheeba. But they never stopped producing arresting slow-mo grooves that mixed hip hop, dusty grooves, 60’s lounge and amazing string arrangements. For The Wages is a great example of how Alpha mix dramatic builds ala James Bond soundtrack vibes that move the mind and the soul.

Morgan Delt is fairly new on the latest psychedelic scene renaissance. Barbarian Kings is dreamy, creepy and hypnotic. Delt skips the entrapments of trying too hard to be retro and spends his time making a dense yet still lush backing track for his whispery vocals.

Tones On Tail "You, The Night And The Music"

Tones on Tail were always about doing pop music from outerspace according to Daniel Ash. You, The Night and The Music sums up everything I loved and still love about TOT. I go back to these songs every few years and gain a new appreciation every time. Who else would put an annoying squall of a synth on top of a nice acoustic chord progression? Sound effects and strangeness were always a conscious decision that heighten the song rather than act as a cheap prop to get your attention