"These Old Songs" an interview with Kerstin Wilson of Whale Hum 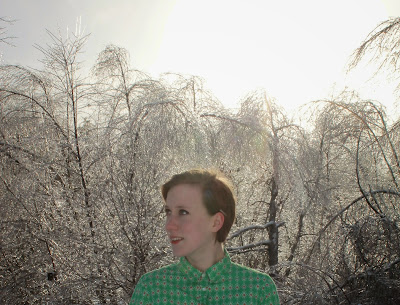 Born and raised in rural New Brunswick, Kerstin Wilson now calls Nova Scotia’s Annapolis Valley home. Whale Hum is an effort to integrate song-writing and recording into everyday life. Recorded in old houses in older villages, it reflects and evokes the warmth and quiet dreaminess of cold winter nights, walks in the woods and afternoons spent by the river. Whale Hum's most recent release "Dream Wake" is available now as a limited edition cassette from Custom Made Music. Whale Hum is some of the most inspiring music I've heard in some time. Thanks to Kerstin for taking the time to do this interview.

CMM-What's the first music you remember hearing as a child and what artists & bands did you first really get into?

KW-The first song I remember hearing was Sinead O’Connor’s Nothing Compares 2 U. It must have made an impression because I would have only have been 2 or 3 at the time. My older brother definitely influenced what I listened to growing up. My parents wanted us to listen to music on Christian labels, so we’d listen to “wholesome” versions of bands like Nirvana, Pixies and Slowdive. Later on, I started listening to the real thing. At the same time, I listened to a lot of 60’s psych pop, folk and jazz thanks to my dad’s expansive record collection.

CMM-When did you first start singing and playing instruments and writing songs?

KW-Music has always been a pretty big force in my life. There were always semi-functional instruments — permanently out of tune guitars and various percussion -- kicking around the house when I was a kid, and when I was 9 I picked up the trumpet and fell in love, partially because of its sheer volume, I think. When I was 12, I bought my first electric guitar. My brother and I were always playing and recording together, but it was sometime in high school that I decided I could write and record on my own, as well.

CMM-So you have lived all over the world. What led you to live in so many different places and how has that affected your music.

KW-I've lived in different countries during a lot of formative years throughout my childhood and adolescence, and I’m sure that it shaped the way I see things and how I go through life. When I got the chance to travel on my own, I moved to the UK for the year. I met someone there and we started a band called Papertiger Sound. Writing and collaborating with someone who is super talented has definitely forced me to think differently about song construction and become better. Throughout our 7 year trans-atlantic collaboration of online file swapping (since moving back to Canada), I think I’ve also learned to be more patient with the writing and recording process - to slow down, take a break and come back to a song. Or at least that’s what I’m trying to do! In saying that, I think one of the best things about living in other places is just forcing yourself to be open to new experiences. Because of that, I've met some pretty amazing and interesting people - some awful ones too! I know that has affected the person I am now, and in turn, the music I currently write.

CMM-So when did you start making music as Whale Hum? I really like what you say about Whale Hum being an effort to incorporate recording into everyday life. Could you elaborate on that a bit.

KW-I started Whale Hum when I moved to Halifax, Nova Scotia from Fredericton, New Brunswick a few years ago. I felt like the change in scenery was a good excuse to try something a little different, without any expectations. To answer your second question, I see writing and recording the way other people might see the gym. It’s something I do for myself to make myself feel better and be better (or at least that why people say they go to the gym, right?). It’s something I do before work in the morning or in the evening after I wash up after dinner. After a period of time, I might even have something to show for it. Being able to spend time in my low budget home studio in rural Nova Scotia just makes me appreciate and celebrate where I’m at. The music I write for Whale Hum, I write to enhance my own day to day reality. I don’t want to change it - I just want to make it a little better. That’s it, really.

CMM-What is the music scene like in Nova Scotia? Any venues and other artists you really enjoy from the area?

KW-Nova Scotia, and the maritime provinces in general, have a very rich history of music and song writing. It’s definitely in the blood. But oftentimes, the artists that are able to get any recognition tend to move to more central and populated locations like Montreal or Toronto. Julie Doiron (originally from my home province of New Brunswick) is one of my all time favourite artists. She started out in a rock band called Eric’s Trip in the early 90’s and has been prolific in her solo music since then. There is certainly plenty of music to enjoy from those who stick around too. A band definitely worth mentioning from Halifax is Cousins, a garage rock duo.

When will we hear some new Whale Hum songs. What are your future plans for your music?

KW-I'm working on new material now but it's hard to say when i'll be ready to share it with the world. I'm not very good with deadlines so I try to avoid them altogether when it comes to my music. My future plans for my music are much the same as my present plans: to keep on keeping on. I'm never sure how exactly that will manifest but I hope there will be a few folks who will stick around to listen.

Posted by Custom Made Music at 1:47 PM