"Open and Shout" an interview with I Need A Plastic Face 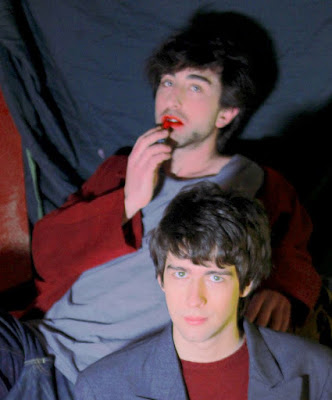 I Need a Plastic Face is a band from Turin (Italy). By the end of 2017 they set up a basement studio and bought an electric organ - a Farfisa Matador - and started writing the songs that make up their debut album "Knick Knacks", which was recorded and mixed in 48 hours. Their main influence comes from The Velvet Underground in terms of coexistence between dissonance and pop harmonies, however the band is also heavily influenced by electronic music, shoegaze and noise rock. I got together with band members Paul Mellor and Massimiliano Alf to talk about their early musical experiences, the music and art scenes in Italy and the making of their debut album "Kick Knacks" which will be available as a cassette from CMM this summer.

CMM - What were you all's first musical memories and what's the first music each of you heard that made a major impact on you?

CMM - How did the band form and what took you all into the musical direction that makes up the bands sound?

INAPF- We met in Turin shortly after we both moved here. A common friend really wanted us to meet and since the first moment we were totally willing to form a band. In the first days we struggled hard to find a drummer, nonetheless we figured out that we were doing fine on our own and came into buying a sampler and an electric organ, which led I Need a Plastic Face to exist.

CMM - What was the writing and recording process for the recordings like?

INAPF - Our songs were born by playing along with each other. We had no idea what was going to happen each time. For what is concerned about the lyrics, they were written together and were rather written instinctively. The recording time took two nights of live sessions.

CMM - Any particular gear you used in the making of it?

INAPF - Our album is mainly made by the combination between the bass and the organ, which we found peculiar in the way they worked out together. The only exception is the leading melody of "Somehow you're Happy", which is played by a traditional chinese flute called "hulusi".

CMM - If you could score a soundtrack for any film director who would it be and what would the film be about?

INAPF - We actually worked on the soundtrack of a film that we cannot speak about yet. Anyway we really hope to be working on a film about Tarkovskij's life, one day.

CMM - How do you see the state of the music and art scenes in Italy these days? Who are your favorite local bands and what venues to you enjoy performing in?

INAPF - The music in Italy is in a very crucial phase. There are plenty of interesting and special artistic realities throughout the whole nation. The only inconvenient is found in the lack of interest by the audience. Italian art is amazing. Our favorite local bands are too many to be mentioned, even though we would really like to endorse all of them. The same goes for many venues that work in a passionate and marvelous way.

CMM - What direction do you see your new recordings moving in and what do you have planned for a follow up release?

INAPF - We only look to be sure that nobody will make any horrible jazz cover of one of our songs.

Posted by Custom Made Music at 1:30 PM