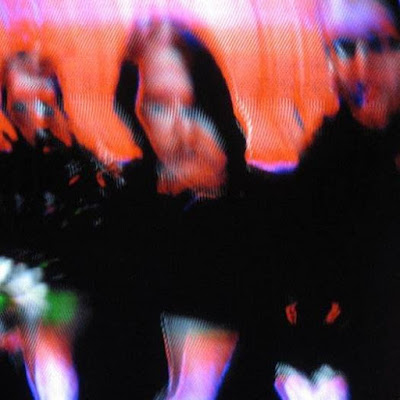 Cushing is made up of three human beings, though in some cases there are four. All 3 or 4 members currently reside in Portland Maine, though none are actually from the city. The band utilizes 805.82 square inches of high quality audio drivers spread across three speaker cabinets positioned strategically on either side of the rather large drum kit (specs are a closely guarded secret). Here Vocalist/Guitarist Serge Vladimiroff gives us a little insight on the making of their new record "Blood Of Cushing" which is available now at from Custom Made Music.

CMM - So your new record "Blood Of Cushing" is out now on CD with vinyl to follow soon. What was the making of the record like and what is different about it compared to the first two releases?

Serge - "On Blood of Cushing we’ve expanded our sound a little but we’re still pulling from the same post-punk and noise rock roots that spawned the first two EPs. Lyrically there’s a lot of free association, sometimes I can’t help but be a little topical but I try not be too specific about anything so hopefully there’s room for people to bring in their own interpretations."

CMM - What was it like working with Todd Hutchisen AGAIN?

SERGE- "We had a great experience recording with Todd Hutchisen at Acadia Recording Company last time so it was a no-brainer to use him again for Bood of Cushing. Todd is great, he gets what we’re trying to do without us having to say much. And he’s always up for trying new things. We tried to give ourselves a little more time in the studio this time but in reality it was probably two and half days as opposed to one and a half days. Plus several nights of mixing."

CMM - Any exciting gear you all got to use during the sessions?

Serge - "We were able to play with a bunch of different amps and guitars. I’m pretty happy with the guitar sound. I split my signal between a Marshall JCM 800 in one room and a Carr Lincoln combo in the bathroom. I also doubled a few parts on a Fender Stat which I generally never play. Evan used a 70’s Orange OR120 and Gallien-Kreuger 800RB with his Kramer 450B aluminum neck for most of the bass parts. We also added some extra textures and sound with some piano, timpani and some vintage synths that Todd had on hand in the studio."

CMM- How about the song writing process. What was that experience like this go round?

Serge - "Evan contributed more to the songwriting here which was refreshing and added a new dimension to our sound. His riffs are the basis for both Super 16 and Little Devil. He also brought in all the found sound stuff you hear at the beginning of Industry. We ran those sounds into an Akai Headrush driving four combo amps, so that each of the four faux tape heads was routed to a different amp, creating a crazy, swirling sound cloud."