"Here With You" an interview with Shoegaze/Post Rock band Reveries 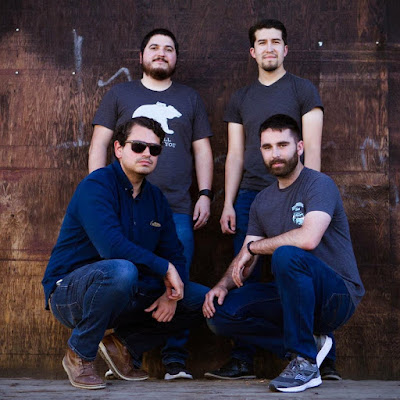 Started in Walla Walla, WA in 2016 shoegaze/post punk unit Reveries just released their debut E.P. on cassette through CMM. I sat down with members Jonthan Avila and Jesse Flores to talk about their early musical experiences, the making of the E.P. and the current music scene in the Pacific North West. Pick up a copy of the cassette here.

CMM-What were you all's first musical memories and what bands/artists made the biggest impact on you all as musicians.

Jonathan Avila: When I was a child, my father had a KROQ compilation CD that included many Alternative Rock bands. The bands that stood out to me were The Cure, Berlin, and The Smiths. I always enjoyed the way they combined existentialism and love. Johnny Marr made a huge impact on me. I feel like every time I revisit The Smiths’ albums there’s always one riff that I didn’t catch the first few times around because of how layered his guitar work is. He’s very inspiring. Chino Moreno constantly inspires me to challenge sound. I think that’s why I navigate through different styles of music, mainly Alternative, and create a concoction of different “post-” elements.

Jesse Flores: My dad was always playing oldies on repeat growing up. We’re talking Earth, Wind, and Fire, The Temptations, Chicago, Tower of Power, stuff like that. Every trip in the car, every family gathering, every DIY home improvement weekend, there was ALWAYS music playing at my house. While under-appreciated at the time, it drove the household nuts but in retrospect, probably planted the love for music in me subconsciously. I started out like a lot of kids did, worshiping Blink 182 and trying to learn all the songs on guitar. I was a Pop-Punk kid at heart (still am) but when I discovered the textures, and different sounds guitars could make after discovering This Will Destroy You, my lust for effect pedals began and I become more interested in different kinds of gear. This led me to a more experimental writing style.

CMM-How did the band form and what took you all into the musical direction that makes up the bands sound?

JF: Jonathan and I had been in a project together years prior to Reveries and since have been “on-and-off-again” jam buddies. Jonathan had 2-3 songs he had in the works and hit me up to jam them. Once we fine-tuned the sound we were trying to go for, we brought on Ryan via Craigslist, who fortunately, was not a Craigslist Killer. He’s a rather nice guy, in fact. Once we had 4 songs somewhat formulated, Jonathan booked us a local house show gig and we had to phone-in a bassist. So we reached out to Jose, who was also in the old project with us (and others with Jonathan) because we knew he could learn and write bass parts quick. We all meshed well, musically, so we became an “official” band naturally. We never really had the discussion though, so maybe I shouldn't be so comfortable with my position. (Haha). JA: We wanted to create a sound that would appeal to our local community, which is mostly a retirement community. We’re the Florida of Washington State. After writing three songs, and practicing them, they became very tiring. Jesse and I weren’t thrilled about it anymore. Eventually, the sound began to take a different shape when we started adding lots of reverb, delay, chorus, and other effects.

CMM-What was the writing and recording process for the E.P. recordings like?

JF: Basically, a lot of tracking, not liking it, adjusting tone and trying different fx, and then re-tracking. We had the luxury of having our own recording gear at our disposal so we had the time to be picky about every little.part. We had recorded drums with a fellow Walla Walla musician, Bryan Henry, but everything else we recorded in a piecemeal fashion at my place. During the recording, is where we were really able to nail our vocal melodies and style that we wanted to go for as well as totally rewriting sections of my guitar parts on “Existential Anxiety” last-minute. With 1⁄2 the band living an hour away, it is not always easy to get all members together to write so we really do most of our writing in-studio and our practices take the form of live shows. Not the most ideal method, but I like to think it has sufficed thus far.

CMM-Any particular gear you used in the making of it?

JA: I think scoring a soundtrack for Alejandro Gonzalez Inarritu would be amazing! The film would be about an immigrant dealing with mental illnesses: depression, anxiety, and paranoia that the universe is not on their side. This person coexists with people who feel the same way and have mental illness as well, but they’re too proud to admit it due to an image they’re trying to uphold. The film puts you in the two different pair of shoes. The film surrounds the immigrant with imagery of destruction, and the things that keep this person living (which would be up to interpretation).

CMM-How do you see the state of the music and art scenes in the Pacific Northwest these days? Who are your favorite local bands and what venues do you enjoy performing in and seeing shows most?

JA-Right now the musical and artistic state of the Pacific Northwest is very dog-eat-dog. It’s very egotistical. There’s little to no support, and maybe that’s why we don’t see many PNW acts making it big out there. My current favorite local band is Hibou; a great dream pop act that’s underrated. We enjoy seeing shows at El Corazon.

JF-From what we personally experience, its hurting a bit. In our hometown, the favored scene consists of cover bands, blues/jazz, bar bands and country acts (around County Fair time). Which are all great in their own rite but the alternative scene has always suffered. There’s no venues or clubs for the alt scene so it falls on people putting on house shows which always run the risk of getting shutdown. We hope this will change someday. As far as other areas in the PNW, we’ve had a hell of a time getting on shows in the Seattle and Portland area. Venues seem to only be booking weekday shows which conflicts with our 9-5 lives and schooling, bands are unable to commit to show dates or ignore contact entirely, and other bands Jonathan had helped to get shows in Seattle ended up having a garbage turnout. It’s discouraging to say the least. But thanks to David Gross and his band The Lost Echoes, we will be playing in Portland for the first time on July 20th at Lovecraft Bar. We are playing with a band from Bellingham, Washington called Tetrachromat on July 6th and I just started listening to them. They are sweet. Go check them out! Some venues I enjoy visiting in the PNW are Wonder Ballroom and The Hawthorne Theatre in Portland. In Seattle, I like The Showbox

CMM-What direction do you see your new recordings moving in and what do you have planned for a follow up release?

JA: For the most part we have found our sound, but there’s always new ideas inspiring us to challenge that sound. We want to explore different sounds. We hope to release a few singles following up to our LP release. We’re still unsure how many tracks we’ll have on it.

JF: This band came to be by heavy experimentation, so expect new content to be similar but hopefully fresh and not fitting into just one pigeon hole.

Posted by Custom Made Music at 8:44 AM