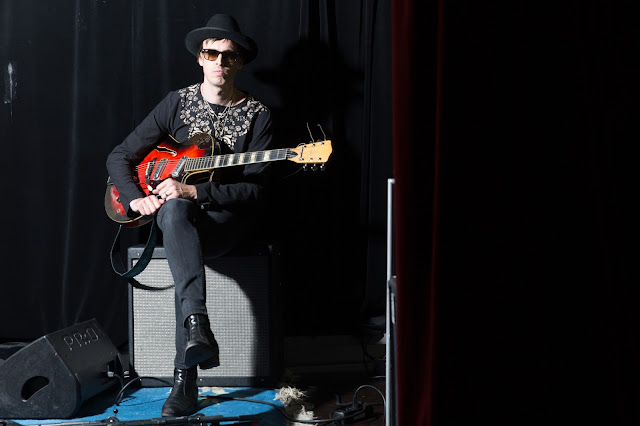 Black Light White Light is a psych rock band based in Malmo, Sweden centered around founder Martin Ejlertsen on vocals and guitar. Their latest album "Horizons" is a fascinating journey of colorful, atmospheric, psychedelic pop. We sat down with Martin to talk about his first musical memories, the making of the album and the current music scene in Sweden. "Horizons" is available now on Cassette and CD from Custom Made Music.

Martin-My first musical memory that really made an impact must be the Muppet Show. Seeing this comedy-variety serial TV-show and discovering the great songs from the show on LP on my parents stereo with a big pair of all too big headphones lying on the carpet while imagining all these wonderfully strange muppet characters in my mind made an everlasting impression.

CMM-When did Black Light White Light start and what was the inspiration for the musical direction you went in?

Martin-Black Light White Light startet in 2009 when I i decided I was done playing cinematic post-rock and wanted to go back rediscovering more traditional songwriting very much inspired by the 2000s new wave of US rock and roll and shoegazer bands like the White Stripes, BRMC and Yeah Yeah Yeahs. I decided to start my own musical project grounded on trying to create great melodies and melodic songs but with an edge to them. Constantly working with a kind of duality in both the music and the lyrics. This is not so much of a concept as it just came so naturally to me from the very start. I wanted the band name to reflect this too.

CMM-How has the band evolved over the years as far as line ups and directions in style?

MArtin-The band has gone from being a bit more garage rock and roll in the beginning which you can hear on our first EP, then getting a more desert rock kind of US sound on the first two albums - both recorded with US producers - to now getting a more British attitude and experimental expression on the the album Horizons.

CMM-Your new album "Horizons" just came out. What was the writing and recording process for the album like?

Martin-While both Infrared Daylight and Gold Into Dreams were mostly recorded live as a band in the studio over around a week with some days of over dubing afterwards the approach on Horizons has been very different. I started working with a new upcoming and very talented Danish producer. Only him, me and a new Swedish drummer went into the studio working on ideas and sketches for 5 new songs not really knowing exactly how they should sound. We worked through several sessions on these songs before coming to a conclusion using them as a foundation for the whole album. This time we really used the studio as an active member of the band creating the songs and sounds as the ideas popped up while recording together. Very time consuming but also very very interesting and rewarding.

CMM-Any particular gear you all used in the making of it. (Guitars, pedals, amps etc)

Martin-I have quite a few pedals and used most of them. But the trick this time was really that nothing wasn't allowed. We'd try to come up with crazy ideas. Making the guitar sound like a synth or vice versa. Many times we would plug the guitar directly into the mixer in the studio from the guitar pedals and tweak sounds around. You'll really get a whole new world of sounds by skipping the amp. Which to me earlier was not really an option I had worked with. So Fuzz Face, Warped Vinyl Analog Vibrato and Boss Giga Dealy were probably the main pedals used on the new album.

Martin-Then I would aim high and work with Guillermo del Toro infusing visual and poetic beauty, and elements of horror and fairy tales into the narrative of Tom Wolfe's 'The Electric Kool Aid Acid Test' but even implementing and capturing the strange times and mythical 60's and Summer of Love.

CMM-What's the scene like in your part of Europe? Any bands or venues worth mentioning?

Martin-There is such a musical talent in Sweden, probably more than ever before in history, but so little will, investments and visions to support it. The radio stations are very focused on playing mostly big international and national pop names and that's what the main public is therefor also into. Going out hearing new bands playing live is not something most young people today really seem to do or are interested in unless it's a big or very hyped act. That's hurting the venues making it harder for new bands getting gigs. Many new, national and very talented bands are therefor focused on trying to get big internationally before establishing themselves nationally. We have great venues but mostly bigger and it's making it hard getting a slot unless you are a big act. With all that talent I don't understand why the Danish government won't invest more in developing local musical talent that can be exported big time. This is what Sweden has done with great success for many years. Some of the newer Danish and Swedish acts I like are Palace Winter, Cancer, Masasolo, Amason, HOLY, Tussilago. I miss The Soundtrack Of Our Lives. But hey, I tend to be nostalgic.