CMM Spotlight : An Interview with Cushing 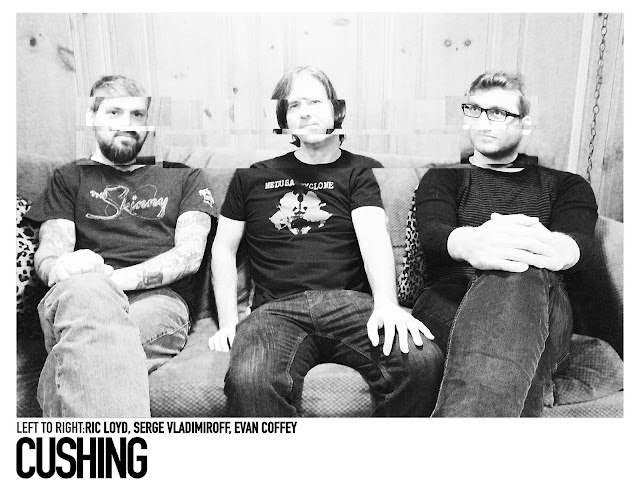 Cushing are a noise rock band from Portland, Maine made up of guitarist Serge Vladimiroff, bassist Evan Coffey and drummer Ric Loyd. The trio share a mutual love of indie rock, post-punk, slowcore and krautrock and manage to hash everything together into a unique and cohesive sound. CMM checked in with the band to talk about their wide range of influences, what brought them together and the making of their latest E.P. "Curse Of Cushing".

CMM-What are you all's musical backgrounds and what bands/artists made the biggest impact when you all were growing up.

SV-I grew up on a lot of classic rock and metal and started playing guitar in junior high. Cream, Led Zeppelin, Black Sabbath, Scorpions, Slayer, D.R.I. and Voi Vod all had a big impact through high school. Later I discovered the Butthole Surfers, Big Black, the Residents, Sonic Youth, Wire, the Birthday Party, Husker Du, Chrome, Can, the Velvet Underground, Leonard Cohen etc. We get compared to a lot of 90's bands but I think it all goes back to some of these earlier influences. I tend to like stuff that's on the darker and more challenging side but at the same time there's got to be a hook and some structure. I studied music theory and composition but not a lot of that directly applies to Cushing. Maybe some orchestration. How to layer things in interesting ways…Devo and the Cars are great examples of bands that can do that in a short pop context.

RL-I have been playing in bands since the 6th grade. Early on my influences were metal/punk bands like (Black Sabbath, Circle Jerks, 7 Seconds, Minor Threat, Sonic Youth, Metallica). I went to college in western Mass in '91 where I really got in to indie/mathy shit like Shellac/Rapeman, Bitch Magnet, Melvins, Slint, Circus Lupus, Polvo...stuff like that. Still really into metal though, especially the stoner shit.

EC-I've been playing in bands since I was 12 or 13 with a few years off to clean toilets in Antarctica and run a hostel in New Zealand. I grew up on bands like Unwound, Fugazi, Sonic Youth, and heavier things like Botch and Converge. In college I was obsessed with a lot of the Midwest touch and go/amrep scene, especially Shellac, Slint, Jesus Lizard, Dazzling Killman, and the Melvins.

CMM-How did Cushing get together and was there a specific mindset or direction you all set out to go in before you started writing your first songs?

RL-Initially Serge and I were just jamming on stuff that he had already started on. Then we got Sean Hadley involved and it just started to head toward a sound that evoked some of those 90's influences with a little bit of kraut rock thrown in. At least that's what i remember.

SV-Right. When Ric and I started playing I think it could have gone in a few different directions depending on who else came on board. Initially, I had no intention of singing…a different singer could have pulled us one way or the other. I think Sean came on board and I started signing around the same time and it just evolved naturally from there. And Evan fit in great after Sean left. We have a lot of common influences and we all get along really well.

CMM-I've read the name of the band is a tribute to actor Peter Cushing as well as an island of the same name off the Portland coast. What drew you all to the word Cushing. Also assuming you guys are big Star Wars fans what did you all think of the CGI recreation of Peter Cushing as Grand Moff Tarken in Rouge One?

SV-I was drawn to the word because it had different meanings and it links us to Maine. And for me, I always associate Peter Cushing with the old Hammer movies more than Star Wars. His roles as Victor Frankenstein and Van Helsing are fantastic. Curse of Frankenstein, Horror of Dracula, Brides of Dracula etc. There are so many, great stuff.

EC-Total garbage. Rogue One had so much potential but fell flat for me. CGI has never done it for me, not to sound like a pretentious ass, but once you see a movie like Lawrence of Arabia it makes it incredibly difficult to appreciate anything CGI. As with everything, analog is always preferable.

RL-Unlike Evan I thought they did a good job. Peter Cushing is dead. How else can you put him in a movie that starts pre A New Hope?

CMM-The bands latest E.P. "Curse Of Cushing" was recorded and mixed by Todd Hutchisen at Acadia Recording Company. What was the writing and recording process like and what was it like working with Todd?

EC-I love Todd, he is always ready, willing, and able to capture the results of whatever crazy rabbit hole one might go down. We did the basic tracking live in the same room and then Serge and I went back a couple more times to add the more textural elements.

SV-Yeah, Todd's great and understood our sound and what we were going for. The basic tracks were done in a day, including vocals. I went home and recorded some extra guitar and synth bits and then Evan and I added a few more things in the studio. Evan added an extra guitar on Assholes and I added some sleigh bells and piano plinking.

CMM-Any particular gear you all used during the sessions?

SV-My set-up is fairly straightforward. A Gibson Les Paul XR-1 through a Marshall JCM800. I used a Fender Mustang and Guild S70-D in a couple places. And I use a custom fuzz / distortion combo pedal with oscillation switches that Evan built.

EC-On Assholes we ran a stainless steel egg slicer with a piezoelectric transducer through my bass amps. I run a stereo rig starting with a Kramer Aluminum-neck bass which goes into two separate effects chains which go into their respective GK head and 1x15" cab (see diagram). 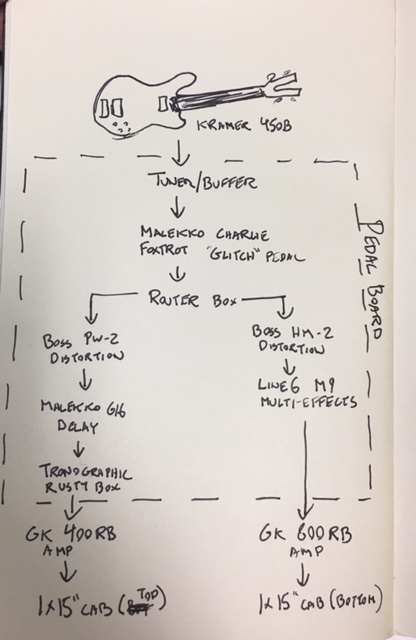 CMM-What's the music scene like in Portland Maine? Any stand out bands and venues you all recommend?

EC-Check out An Anderson, they'll blow your mind.

SV-Yeah, they’re great. Crystal Canyon - this is Todd from Acadia and my wife, Lynda Mandolyn so I'm a little biased. They're finishing up their debut record which is going to be amazing. I also like Purse a lot. The scene is pretty small but its alive and everyone has a lot of passion for what they're doing. Like a lot of cities, its a struggle for alternative spaces to thrive and stay open. The number of places that can accommodate a loud rock band are limited. SPACE Gallery is probably our favorite local venue. They get a good number of national acts but they also host a lot of local bands too.

CMM-(For Ric) I hear you have worked in the movie business a bit. How did you get into that line of work and what films have you worked on? Any interesting on set stories you an share?

RL-I went to Hampshire College to study film but it ended up being too art based for me - I wanted to do narrative. So I sort of forgot about it until I moved back to Maine, Portland, and stumbled into the local commercial/industrials market. I was non union doing that when In The Bedroom was being filmed in Maine. I had friends in the union that knew I was a grip and when they needed extra grips they mentioned me. I got on the movie but I had to join the union (which was what I wanted to do anyway). So I worked on that film, Session 9, A Good Day To Die, Mona Lisa Smile, The Departed, Gone Baby Gone, The Fighter, Shutter Island, Evenings, The Proposal, Ted, Noah, RIPD, American Hustle, Zookeeper, there are some more there I know I'm forgetting.

On Shutter Island. We were filming in East Boston/Chelsea area. It was a huge green screen set up on the ferry that takes DiCaprio over. There was a 40' x 80' contraption hanging off of a construction crane over the set to block out the natural light (see pictures). It was spring and all of us local guys were trying to convince our boss, a key grip from LA, that that rag was way too big and dangerous for the wind. He sent it up anyway, and at one point i was headed back down to set and saw this 40’ x 80’ sail fly up, while in the crane cable, twist like a pretzel rod, and then fall on the set. It almost took out several people who were holding guy-line in to the drink, punched a hole in a shipping container (right over someone’s head) slam in to the boat we were using but didn't leave hardly a dent on it. Probably the stupidest thing I have ever been party to. The best was sitting down and having lunch with Betty White on the Proposal. 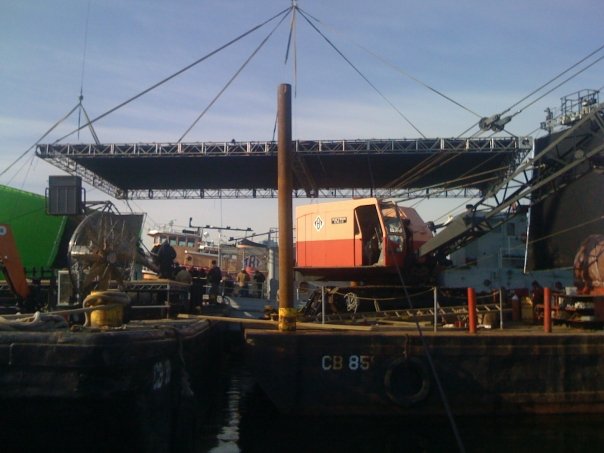 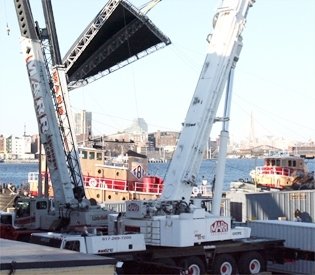 CMM-(For Evan) Tell us about your pedal company Electro Audio Destructors.How did you get into building effects pedals?

EC-I started building pedals in college because I couldn't afford nice things. I built a couple of devices for some of my friends under the "Buttronix" moniker. I switched to Electro Audio Destructors when strangers started trying to buy pedals from me as I had delusions of grandeur that I might actually make a living building pedals. I'm less active these days and really only build things for myself or my close friends, though I am working on a video distortion box at the moment. 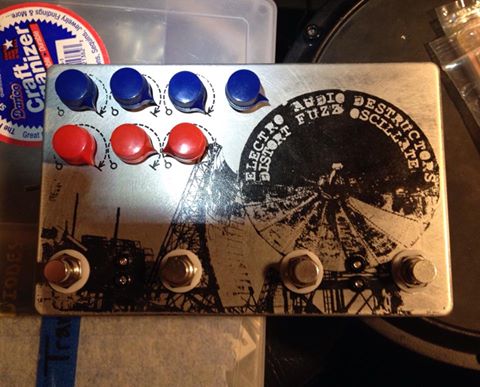 CMM-What's the band got planned for the short and long term? Any touring or out of town shows anytime soon?

EC-We have a bunch of new songs that are in various states of existence, so hopefully we will get back into the studio in the Spring or early Summer.

SV-Yeah, definitely another release for 2017. No tours but hopefully some out of town shows soon. Maybe Boston, Western Mass, Providence. 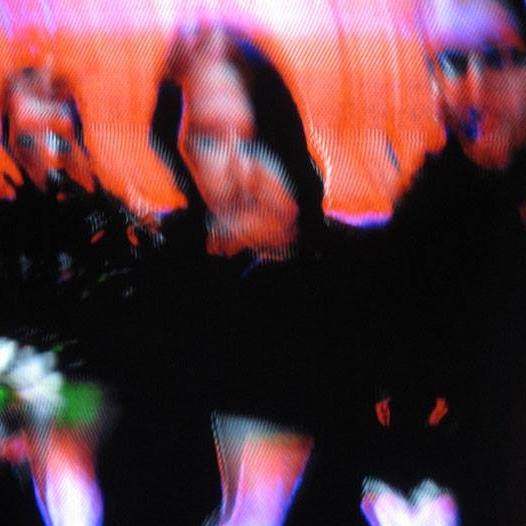