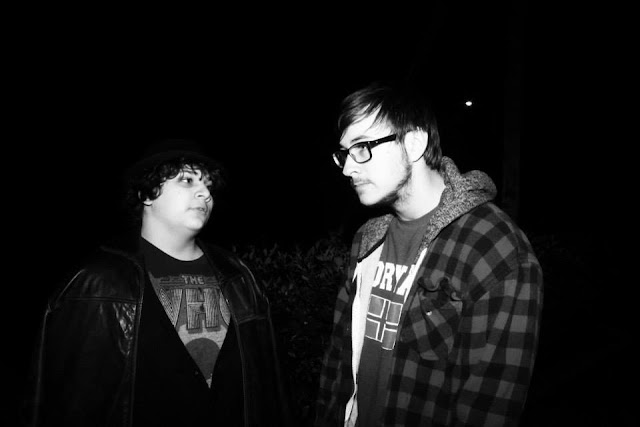 Animal Backwards are a shoegaze, noise rock band made up of Richard Rossi (vocals/guitar) and Dillon Colson (vocals/guitar). The Seattle Washington based duo just released their debut E.P. "Rainbow Machine" which you can pick up at laminabackwards.bandcamp.com We sat down with the band to talk about their early musical experiences, how the band came together, their love of the "Rainbow Machine" effects pedal and their E.P. of the same name.

CMM-How did Animal Backwards get together and who all makes up the band?

Dillon-Late 2014, I picked up the guitar and wanted to learn how to play it, so I came up with the idea to write an EP to help learn to play the guitar, sing and to learn basic songwriting and structure. Richard and I were in a previous band together and I’ve known him to be an extraordinary musician. So he helped me out with writing and recording. Unfortunately, that EP never was finished, but two or so months after that we decided to make a band with the two of us, and a drum machine. A year later, we finally have our first EP out together.

Richard-We also have Zach, who plays bass for us live.

CMM-What bands did you all really get into growing up and who made the biggest impression on you all as players and songwriters?

Dillon-When I did first get into playing music, I was really into The Who. I played bass and John Entwistle was just godly. There is a reason they call him the Ox after all. I was also really driven by bands like The Clash or The Replacements when I was younger too. Though, for the past two years or so, Modest Mouse’s Isaac Brock has to be my strongest influence, especially when it comes to guitar playing and Singing. Modest Mouse, Beat Happening, Built to Spill, Pavement and old 50’s songs are really my bread and butter. Richard, then of course had turned me over to the Shoegaze and noise rock scene.

Richard-Growing up it was all about Pink Floyd and The Who for me, but the last few years I’ve been really into the noise-rock/shoegaze/Dreampop scene, like The Jesus and Mary Chain, My Bloody Valentine, Big Black, Slowdive, and Sonic Youth. Thurston Moore, and Steve Albini have had great impacts on my songwriting, because they go so far outside the box of ‘verse-chorus-verse-chorus’, as well as Albini’s excellent audio engineering inspiring me to go to school for that.

CMM-The bands debut E.P. "Rainbow Machine" is available now on digitally. What was the songwriting and recording process of the E.P. like?

Richard-We’ve had all of those songs for a while, Television World in particular has been around since Dillon’s 2014 EP that wasn’t finished, but we mostly just never got around to recording them.

Dillon-Yeah, we don’t record often. The recording process wasn’t too bad. Whenever we did record we would just lock ourselves in Richard’s room with our instruments, boards, recording gear, and mozzarella sticks. Putting the songs together at this point, mostly works with me at home finding something I like, or recording it and taking it to Richard later for opinions and advice. On my own personal soundcloud there is a lot of old original (bad) recordings of our songs where it was just me doing it at home. Richard always comes to save the day when it comes to recording and song structure. 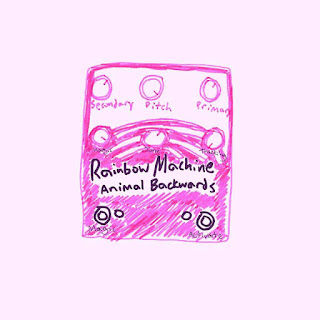 CMM-Any particular gear used when making the record? I figure you all must love the "Rainbow Machine" pedal?

Richard-Lots of guitar pedals. That’s kinda my thing. The Earthquaker Devices Rainbow Machine is responsible for a lot of the really weird sounds on the EP so I thought it’d be nice to call it that. Other than that, my Jazzmaster is pretty important to my sound.

Dillon-I don’t really have a lot of pedals, so I stick with the few I have, and the ones Richard doesn’t use; Which actually includes the Rainbow Machine right now. I mostly just stick with my Blues Driver, UV-300 Vibrato, and delay. That mostly makes up my sound. Well, that and aggressively pulling on my Jaguar’s Tremolo when I hit harmonics. I’m a sucker for stupid amounts of harmonics. It’s an Isaac Brock thing.

CMM-What do you all think of the current state of the Seattle music scene? Any new bands and stand out venues you all an recommend?

Richard-The Seattle music scene is pretty rad. People are very open to new ideas and stuff. When we play live, I’m never really worried about if people are gonna like my music because I know they’re gonna have a good time no matter what. The Ground Zero Music Program in Bellevue is really cool, the shows usually consist of local bands, like us, and the people there are really great. They seem to really care about the music scene in Seattle, and the small bands that make it up.

Dillon-Yeah, most every band we have played with have been really awesome to hear and play with. A lot of the time people don’t seem to know what we have in store, but by the end of it (and all the noise) they seem to be pretty blown away or impressed. There are a few bands that I would reccomend, such as Animal Camera, and Hello I’m Sorry. They’re pretty good friends of ours, and they both really really have something going on.

CMM-If you all could do a film score for any director who would it be and why?

Richard-I’d be the first guitarist in John Williams’ orchestra, for the next Star Wars movie. Because that’d be badass.

Dillon-This is a really tough question. Maybe my own films? I have no clue actually. I really loved everything that Edgar Wright has made, but I’m not quite sure. Though, I could confidently say I would be good at writing a creepy sounding score.

CMM-What's next for the band? Any new recordings or upcoming tours?

Dillon-That sounds like a lot of work… In actuality, we gotta write some more songs, perhaps get a full album out sometime this year. As far as an upcoming tour, probably not any time soon, but once we have an album out we'll probably do a small tour around the coast.