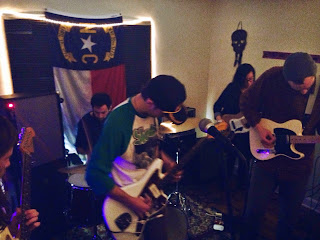 Hailing from Boone North Carolina, Earth Mover play their own unique brand of shoegaze & dream pop. The band features the guitar trio of John Russell, Keith Bendt and Mike Duignan, bassist Morgan Brown and drummer Jay Salton. With a handful of self released E.P.'s under their belt, they are quickly become a fixture in the North Carolina underground music scene. Each member chose one of their favorite songs for this weeks "Five For Friday" feature but first enjoy the bands song "Faded".

I really love everything about this song, even down to the title. As someone who has spent the past 3 years working third shift, I can relate. I really dig the fuzzy-southern mix that Water Liars are doing right now (even though this song is pretty clean for them). Live they’re even more dynamic and emotional.

This song is transcendent and otherworldly. Fahey was a West Coast dude, but this song and album sound so utterly Appalachian to me. I listen to it every time I’m on the Blue Ridge Parkway or driving down U.S. 321. It continues to open my heart and mind and inspire me spiritually and musically.

I heard Weyes Blood for the first time when played in Boone while on tour with Sun Araw last fall and since then have not been able to get enough of her record “The Innocents.” The combination of simply pretty folk music, tape distortion, and warped piano noises make this track a stand out for me. Plus it has a great music video with a Shiba Inu in it.

(Mike Duignan) Ought- "The Weather Song"

I found this album a few months ago and this particular song has been on repeat ever since. Im sure my interpretation is all wrong here but to me, this song is about ideologies that you hold onto in order to form a sense of self...Living vicariously through lies... Lies that are near and dear to your heart, because without them your image of self is destroyed. This song provokes self awareness and points out the dichotomy of the ego and consciousness and for that reason, its pretty rad.

Ought "The Weather Song" from Constellation Records on Vimeo.

Vision Creation Newsun is one of those albums devoid of a dull moment, one of those precious musical gems in which the songs flow together with an almost cosmic confluence. The energy that emanates from the drums in ☆ is absolutely unreal. Coupling the pounding tribal rhythm with airy swirling synth sounds provides a certain aural experience that I would recommend to anyone regardless of their musical preferences.

Posted by Custom Made Music at 9:59 AM