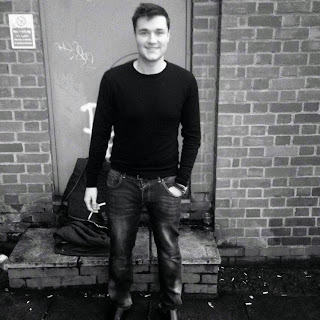 Edward Jakenssen is a singer songwriter based in Norwich England. His brand of lo-fi garage rock n roll brings to mind the likes of Guided By Voices, The Replacements and early Lemonheads. Edward has selected some of his all time favorite tracks for this weeks edition of "Five For Friday" but first have a listen to his latest single "Teleor"

This is the first song I ever loved. I was five years old, and it was on the radio all the time. I walked in to a record shop just after closing time with my dad, who told the store clerk I really loved them. He (unsurprisingly) thought my dad was using me as an excuse to get the album for himself, so he turned and asked me "If R.E.M really are your favorite band, what is the name of the lead singer?" to which I replied "Michael Stipe, and he's the BEST SINGER IN THE WORLD!". Fast forward fourteen years, and I still have their entire discography on my phone, which I still play frequently. This was the song that made me fall in love with music.

Green Day where the next band I fell in love with after R.E.M when I was about eight years old. However, in typical Eddy Jakenssen fashion, my favorite track by them was never going to be "American Idiot" or anything anyone had ever heard of! This track is probably one of their least well know, but I just love the sound of it, and though I had many favorites, this one, for me, just seemed to be a cut above the rest. I have since moved on musically from Green Day, but the reason I loved them so much was their frequent use of relative minor chord progressions. They also taught me to favor great songwriting over great production and complexity.

The most recent addition to my list of all-time favorite songs, by the band that inspired me to write Teleor. Lo-Fi is where it's at right now for me, and even though I have been listening to GBV on and off for the last three years, I can never remember hearing "Game of Pricks" (If I did then it must have been the "Tigerbomb EP" version). The "Alien Lanes" version of this track is slower, a semi-tone higher, and has no unnecessary intro that adds absolutely nothing to the song ( I do realize that none of this was GBV's call). It's a minute and a half long track, and when I first heard it a couple of months ago, I had it on repeat for three hours. Robert Pollard is my songwriting hero. He was once asked "I heard you can go to the bathroom and come out having written five songs, is that true?" His reply? "Yes, but only three of them are good!".

Sahara Hotnights - Only The Fakes Survive

My favorite song by my favorite band. I haven't stopped listening to them on a daily basis since I discovered them.. I was clearing out my Youtube favorites early last year, when I found a song called "Alright Alright" by a Band Called "Sahara Hotnights". To this day I still have no idea how it got there (but I'm glad it did) I then decided to work through their discography, and when this song came on I couldn't believe my ears. I've listened to it thousands of times, and it's still just as good as the first time I heard it. Fast forward a year, and I own almost their entire discography, (including rare singles and EP's) as I sit here, waiting for them to re-appear in the music world.

My favorite track of all time. Everything about it is just fantastic, and I guarantee you can listen to it a hundred times and you will still be hearing things in it you'd never noticed. This track isn't a single, nor was it ever featured on an album. The only place it can be found is in the Soundtrack for the movie "Scream 2". After hearing this Everclear soon became my favorite band, (and continued to be for another four years until I discovered the Hotnights). The words in this song also mean a lot to me. Being a teenager, whenever a girl "broke my heart" I always used to lock myself in the bathroom, and "Shave my skin to show a brand new face" as if it were a ritual. For me it's a song that suits any mood, and it contains what I like to describe as probably the best three-chord opening arpeggio my ears have ever had the pleasure of hearing.

Posted by Custom Made Music at 7:12 AM