"Five For Friday" with Sam & Hugo of Gillbanks 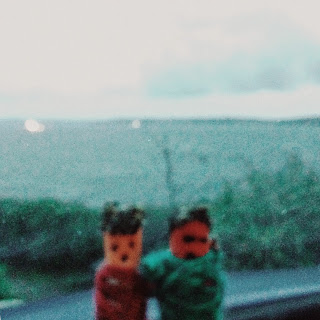 Hailing from London, Gillbanks made up of Sam Gillbanks and Hugo Heaverman have just released their debut single "Anxious?" which is a brilliant combination of blistering alternative rock and melodic Brit pop. Sam & Hugo have shared a collection of their favorite songs for this weeks "Five For Friday" feature but first enjoy "Anxious?" taken from their upcoming album 'Lived-In'.

I am a strong believer that Flying Lotus is currently the don of electronic music. His use of rhythm, dynamics and instrumentation is extremely inspirational and impressive. '1983' showcases a different side to him. It's less hectic compared to recent release 'You're Dead!' but still has a similar feel to it. I love how the sounds wouldn't seem out of place in a Sci-Fi movie. This track really opened up my mind and encouraged me to experiment with different tempo's and rhythm's. I guess that's why it's special to me. It's not every ones favorite album or track of his, but I don't care, I love it.

Radiohead are my favorite band due to how diverse they are. Each album is different but never fails to impress me. It's really hard to pick one Radiohead track that has influenced me, mainly down to the fact I could easily name at least 20. However I've decided to go with '2+2=5' because it's f***ing great! The way the track builds throughout is beautiful and the jagged riff at 2:25 just makes the song for me. The sounds and the dynamics created throughout this track have really influenced the music I create and along with many other Radiohead songs will continue to influence me for a very long time.

This was the first ever Broken Social Scene song that graced my ears. I remember the moment well. I was around 18, sat in my car, in a Tesco (a horrible British Supermarket) car park with one of my good friends and he said "have you heard this? You'll love it" and he was damn right. Right from the start I was in love. The production, the vocal melodies, the dynamics, the drums, the guitars, the brass creeping in towards the end; pretty much everything was ringing alarm bells in my head saying why haven't I heard this song or band before? Whenever I hear this song it makes me feel something positive and inspires me to create.

Jonestown is actually a fairly recent interest of mine. I bought “Their Satanic Majesties’ Second Request” on record not long ago, and haven't been able to put it down. It’s that dreamy vibe that sets me up before I get stuff done. I get lost in like a blanket of soft touch instruments that caress my ears, and this is the kind of stuff I’m going to be feeding off when I make some stuff of my own at some point. This track in particular just has a completely care free attitude, and sometimes I need that to relieve myself from getting choked up by everything that is so “important”.

Hugo: Nick Cave And The Bad Seeds - No More Shall We Part / Jeff Buckley - Grace

This final choice has to be a tie between Nick Cave And The Bad Seeds’ “No More Shall We Part” album, and Jeff Buckley’s “Grace”. The f***ing energy and extreme emotion that’s gone into these tracks can only be felt, and the lyrics make you explode. I love how the aggressive moments in both albums build, and how at most times the stories they are singing about are so sad, yet you feel amazing! The dynamics are really important to me, especially when faced with such powerful lyrics, and this is something that myself and Sam always had in mind when working on the album. In fact, I sometimes used the track “Dream Brother” off the “Grace” album as a reference when mastering the album.