"Cinematic Atmosphere" An Interview with Robin Pringle of Deer Leader 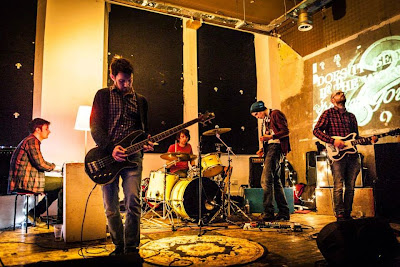 Deer Leader are a five piece post rock band out of Glassgow. Their debut single "Know Everthing, Know Everyone" has been getting some well deserved attention in both the U.S. and the U.K. We got together with guitarist Robin Pringle to talk about the bands origins, the recording process of their two singles and what inspires them to make their epic sounding music.

CMM-How did Deer Leader form and what went into developing the sounds we hear on your debut single "Know Everything, Know Everyone"?

Robin-The band was formed by myself, Stuart (drums) and Craig (guitar) in early 2011. Stuart and I had gone to school together and Craig had responded to an ad we’d placed online saying we were looking for a guitarist. The first year or so of the band’s existence was a little bit of trial and error and it took us a while to settle on a line-up. The songwriting went kind of the same way, initially: we’d always set out to try and make very cinematic sounding music- avoiding filling the space with lyrics to focus more on melody and atmospherics. However, things started to come together once Ross and Scott (our previous bass player, who is now living in China) joined the band. “Know Everything”, came about by accident, I was messing around with a loop and Craig just came in with his pick part. After a week or so, all the parts were in place. However, it wasn’t until Ross added his own guitar line that the piece was finalized (which actually came about a year or so after we’d written the song).

CMM-What is the first music that really made an impression on you as a child? Any particular bands you took to when you where growing up?

Robin-That’s a tough one, as we all have our own influences. I know personally that Idlewild were a massive influence on me, mainly because they were the first “loud” band that I got into. Their second album, 100 Broken Windows, had a profound effect on how I thought about guitar sounds and guitar lines-I actually once went into a guitar store and spent an afternoon torturing the sales assistant as I tried distortion pedal after distortion pedal until I found one that sounded close to Rod Jones’ tone on that record. We obviously had our questionable favorites as teenagers, but I think our musical tastes grew more eclectic as we progressed through University. However, there’s a range of bands that we’re all sort of influenced by collectively, I mean, the first night we formed the band, Craig, Stuart and I sat in a bar discussing the merits of Radiohead’s “Kid A”. We’re also big fans of noisy bands like Fuck Buttons and more classic shoegaze/post rock bands like Cocteau Twins, MBV or the stuff coming from Constellation Records or Temporary Resistance Ltd. We’re told that we sound a little like Mogwai in places and they certainly are a band we love, especially their DIY ethic, but we’re trying to break away from being type cast, so to speak. These days I’d say that we’re most influenced by soundtracks.

CMM-What was the recording process of the single like? There are some really incredible guitar tones throughout. What types of amps, guitars and pedals did you guys use to get those guitar sounds?

Robin-We recorded the singles (Know Everything, Know Everyone and Last Acts of a Desperate Man) in the Old Mill Studios, which was both a sawmill and a theatre before it became a recording studio. The guy we worked with on the tracks, Marshall Craigmyle, is an absolute wizard and was really able to articulate both the louder and quieter parts of our sound. Because the studio is built into the theatre, Marshall used the natural reverb of the space to augment our own reverb effects. He also ran guitar amps up the stone corridors and then had us track certain parts separately and then together to add to the dynamic of the sound. In terms of guitar effects, the three guitarists in Deer Leader use a range of delay and reverb pedals: an EHX Cathedral, T.C. Electronics Hall of Fame, a Boss DD-20 delay, etc. The distorted sound on record comes from the amps we used to record with (A Fender Twin and a Deluxe). After the main parts were put down, we added a few vocal lines (if you listen closely you can just make out some of the phrases); although, these were designed to be used as another texture rather than as lyrics. We also put in some stamps and reversed a wee piano motif (also something to listen closely for). Marshall then managed to get all this to gel and the end result is what you hear on record. We put a wee “behind the scenes” video together that can be viewed here...

CMM-Sounds like it was an incredible experience. What did you find to be the biggest challenge when recording the singles.

Robin-In the end, time became the biggest challenge, which is ironic as we actually recorded the two tracks over two months or so, taking our time with things. Marshall was emigrating to the States at the end of January, so we planned to have everything finished and mixed before he left. Time only became a problem when another band gained funding for their record and wanted Marshall to record it, thus booking all the remaining sessions in January. We used our final day in the Old Mill to work on overdubs, which paid off, but this meant we had to wait until Marshall was set up in San Francisco before we could get a mix sent back; we were adamant that we wanted him to mix it. This resulted in time being an issue again, but to be honest, it was totally worth it. The situation was no one’s fault. Timing just wasn’t on our side.

CMM-If you all had a choice of any band to go on tour with who would it be?

Robin-Again, another tough choice, as we have loads of bands we admire and would love to hit the road with. Although, hypothetically, we’d probably avoid going away with another purely instrumental band, as two bands like that on the same bill is a bit overkill. The bands we play with or ask to play with us are usually bands that share common sounds or a have a similar ethos-we generally tend to play with bands or musicians whose music is maybe derived from the same place, but perhaps have more traditional structures and more often than not, lyrics. We’d love to play with an artist like PJ Harvey, as we’re big fans of the way her music incorporates both conventional song structure and haunting atmospherics, I mean, just look at the juxtaposition of albums like “Stories for the City…” and “White Chalk”. However, despite what we said earlier, we wouldn't say no to heading out with a band like Sigur Ros, as we’re pretty inspired by their aesthetic when it comes to playing live.

CMM-What do you all have planned to release next?

Robin-Well 2014 has been a productive year for the band, so we have a few things still to unleash. Earlier this year we teamed up with a filmmaker friend of ours and shot a few live videos that should be out this year. These are part of a short film that is partially about the band and partially about the theatre we filmed in. There’s a little post production still needing done, so that will probably follow the live performances. It’s also more than likely that we’ll release the audio from at least one of the tracks as a free download later on next year. Whilst this year has been a busy year for recording, filming and playing live, the same cannot be said when it comes to songwriting. Over the Christmas period the plan is to begin mood boarding and piecing together themes, ideas and directions for our debut. We’ll probably spend the first few months demoing ideas for the record-there’s talk of a writing trip either up north or over to one of the Scottish islands- and then, hopefully, begin recording in the spring. I’d like to say that it’ll have a 2015 release, but we don’t want to rush things. There will probably be a gig here and there to test out the new stuff and build up the band’s profile, but the main aim I think will be the record. The next few months will be crucial in the development of our band’s sound.

Posted by Custom Made Music at 9:20 AM