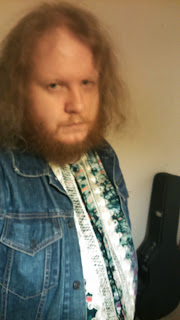 Jonathan Morgan is a psychedelic rock guitarist and composer from Birmingham, England. His latest E.P. "The Clearing Mist" is an inspiring collection of epic space rock, Sabbath like riffs and ambient soundscapes. Jonathan has shared some of his favorite music for this weeks. "Five For Friday" feature but first listen to his song "Ocean Of Milk"

I first heard about this album within a copy of Mojo magazine. I was completely obsessed with early Pink Floyd, especially Piper at the Gates of Dawn and Syd Barrett at the time. He was on the cover of this issue of Mojo with a psychedelic pattern over the whole cover. It's one of my all time favorite issues of Mojo ever to this day. Anyway, the article on Syd in the magazine stated that Syd was obsessed with John Coltrane's 'free-form masterwork' Om. I thought 'Man! I have to check that out!' It took about another year or two for me to actually hear the album which I downloaded from the internet. The crazy thing was, I'd downloaded a version of the album from a file sharing program that sounded like it had been ripped from a tape with someone speaking over the band and reciting what seemed like free form poetry, haha! I still don't know what this file actually was to this day because there was no internet search results for it, nothing! I initially thought that's what the album was like for a short while. Nevertheless, I have a really good original copy of the 1967 Impulse! LP and I still love to play it often, even without the unknown voices over John's band. I made a reel to reel tape of it just a few weeks ago. And... The idea to sandwich the free form jazz between intro and outros comprised of the group reading from the Hindu Holy book the Bhagavad Gita will always seem like genius to me.

The Doors – Break on Through (to the Other Side)

This one just really gets me going, usually in the mornings, before I have to go out. It's one of my most played tracks (and the album) of all time. Jim Morrison's voice is just amazing in general over their whole discography... Plus, I always associate this one with the force of the counter-culture back then in the 60s, and even now. Also, in my opinion there's associations with other things like lifestyle change, consciousness expansion, and mysticism which I really dig personally, and I like that about the song. Break on through! :)

I love this one a lot mostly cos it sounds like an opium den, haha! At least a really cool, smoky crash pad. The amazing main guitar riff, tones and playing, yeah. I jammed to this one a lot but I could rarely get a tone as good and play it as well as the original dude did on the recording, it's just fantastic dark psychedelia. The whole album rules, it's their masterpiece.

Gonna keep this one short because I could go on a long time about this one, haha. I think this piece of music is one of the greatest works of art of the 20th century, the whole LP to be honest. It is incredible. The heights of krautrock.

The Smashing Pumpkins – Thru the Eyes of Ruby

I could go on and on about this one too, hahaha! Anyway, the Pumpkins were my favorite band for many, many years, since I was 12 years old, and this, is one of Billy Corgan's ultimate songs where his own brand of psychedelia really shines. It's got no end of colorful and psychedelic effects and multiple, awesome crescendos. Apparently it used a massive amount of tracks in the studio, something in between 50 and 100, I don't remember the details properly, haha. The lyrics are very strange too, like riddles.... Magical, even. I remember a time when I was a teenager and I'd had a smoke at an old friend's place then listened to this pretty loud. It was surely one of the most euphoric moments of my life, and also one that stirred my imagination most intensely too.

Posted by Custom Made Music at 8:13 AM