Five For Friday with Clustersun

Catania Italy's Clustersun's debut album "Out Of Your Ego" is one of our favorite records of 2014 here at CMM headquarters as it's an incredible collection of post rock, psychedelic, shoegaze mayhem. The band joins us for this weeks "Five For Friday" feature with a collection of their favorite new shoegaze and psychedelic tracks. But 1st take a listen to the the latest Clustersun single "Floating" which is sure to help jump start your weekend. 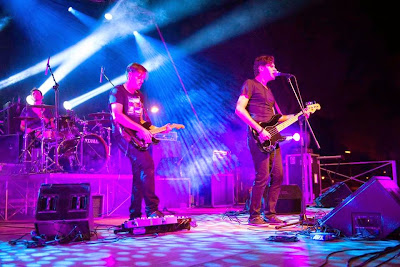 Pinkshinyultrablast is a supercool band from Russia named after the album by shoegaze supergroup Astrobite. This track opens their debut EP “Happy Songs For Happy Zombies” (2009) and showcases a summery wall of screaming guitars, sitting between an agile uptempobeat and creamy female vocals. It was love at first listen with this song and their 14 minutes long EP. Keep an eye on these guys, they’re currently working on their first album, that could be a real blast.

Be Forest is the italian shoegaze/dreampop/post-punk scene leading trio. Based in Pesaro, such as other great bands like Soviet Soviet and Brothers In Law, they raised to critical and popular acclaim with their 2011 debut album “Cold”, in Italy and abroad. This track, taken from the aforementioned full-length, summarizes their style, a soft touch between the classic 4AD sound and the more recent XX, combining hypnotic and ethereal moods. This band is crucial for our story as Clustersun: a few days after seeing them live a couple of years ago, we wrote our first song, and called it “Be Vegetal” as a tribute to the inspiration they gave us. Their second album, released at the beginning of 2014, “Earthbeat” confirm them as a really top notch act.

Ummagma is a duo featuring Ukrainian multi-instrumentalist Alexx Kretov and Canadian vocalist Shauna McLarnon, that delivers an outstanding mix of dream pop, shoegaze, ambient/ethereal, space rock and post-punk: their sound is absolutely unique and creates lovely layered soundscapes. “Rotation” is taken from their 2012 debut album “Ummagma” and builds from a semi-slow groove into something so intense and grand: it’s futuristic and dreamy, a fuzz-drenched journey. Check all their other releases out: “Antigravity” (2012), “Lama” (2014) and their recent collaboration with Sounds Of Sputnik (monicker of Russian musician Roma Kalitkin) “New Born” (2014).

Taiwanese trio that unfurl a landscape of stark, dreamy shoegaze noise-pop, a lovely mix between The Breeders and pre “Loveless” My Bloody Valentine. This song opens their first album “Sacrifice Mountain Hills” (2012) spotlighting the haunting voice of front woman Ben Ben, who alternates between feather-light ethereality and piercing wails, supported by an instrumental magma that interweaves with driving bass lines and shimmering, noise-textured guitar. A pure gem from the Far East.

Another Italian hidden treasure, Rev Rev Rev is a 4-piece band from Modena, with a sound influenced by first-wave shoegaze, as well as psychedelia, delivered in a heavy fuzz driven context. "Honey Sticky Fingers", featured on their self titled debut full-lenght, released in 2013 after the 2012 EP "Hypnagogic Visions", proves how powerful, dense and textural they can be, always retaining an absolutely genuine, fresh and authentic vibe.

Posted by Custom Made Music at 8:30 AM