CMM Spotlight : An Interview with News From Neptune 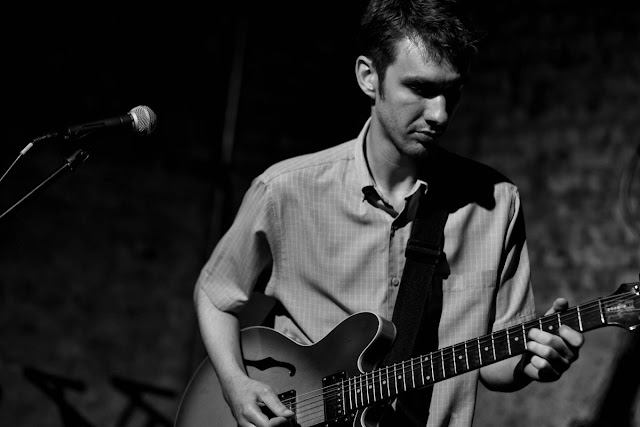 News From Neptune is the brainchild of British musician David Miller. His debut E.P. “The Cold Open” offers up a variety of tones that are futuristic and inspiring. We sat down with David to talk about his earliest musical influences,how News From Neptune came about,the making of the E.P. and some of his favorite bands in the current Wirral/Liverpool scene.

CMM-What music made the biggest impact on you as a child and what artists have stuck with you most over the years?

DM-I started out in my teens obsessed with people like The Stone Roses and The Smiths - my early bands were mainly just trying to mimic their guitar sounds. While that was happening though I was branching out into psychedelic pop like The Flaming Lips, The Teardrop Explodes, Super Furry Animals and The Beach Boys. I was also heavily into Scott Walker's early solo work. Hearing 'Hallogallo' from the first Neu! album was a real mindblower. I feel like it's this stuff which has stuck with me more, though you can probably still hear my inner Johnny Marr or John Squire fanboy showing through in my guitar playing!

CMM-When did you start making music as News From Neptune and what were the main influences that went into forming your sound?

DM-'News from Neptune' was really just the name I adopted back in about 2015 for my solo work once I started playing proper gigs and looking to release material online. Around that time I was listening to a lot of Robert Wyatt - I loved his free-flowing, almost aquatic sound on the 'Rock Bottom' album and I think I tried to bring elements of that into my music. I was also getting to know more about post-rock. Not so much the heavy, crescendo-based stuff - more the jazzy ambience of people like Tortoise and Bark Psychosis. Also lesser-known bands like Disco Inferno and Butterfly Child - there were some brilliant, unique artists around in the mid-90's who kind of fell through the cracks between dream pop and shoegaze. Listening back to the EP I feel like elements of those sounds are in there. Hopefully the influences aren't too blatant though and the music has its own personality.

CMM-What was the writing and recording process for "The Cold Open" E.P. like? Any particular gear that you used?

DM-A couple of the songs (the title track and 'Viewfinder') actually originate from demos recorded about 7 or 8 years ago which I expanded upon - the arrangements are very different too. The other two came together more recently. 'Head On Backwards' is built around a percussion-based track by the German band Faust called 'Party 1' - effectively a sample, which was a new way of working for me. It's interesting that you'd ask what they're about. The whole aviation theme of the artwork, video etc. came up when I realised that the bassy drone at the start of the title track sort of resembled an aircraft engine. I liked the metaphor and kind of ran with it! It sort of fitted in with the airy, free-flowing, slightly dizzying sound (I had some of Disco Inferno's artwork in mind). My bedroom setup is pretty basic actually, just my guitar going into a Line 6 USB interface and a MIDI keyboard (with which I programmed pretty much everything else - bass, drums etc). I'm a Cubase guy though I probably don't use it exactly as it's meant to be! I've made use of various free plugins off the web, most notably a fake Mellotron called 'Meltron' which I use loads. The basic tracks were then mixed and mastered by Matthew Freeman (from a great local band called Pure Joy whose debut album 'Bang Flower' I played extensively on). Some tracks changed more than others when I passed them over to Matty - some he just tidied up and enhanced with his studio magic, while 'The Man in the Microlight' is basically a full-on remix of my original demo.

CMM-What do you find the most rewarding part about making music and art? Has there been a moment were you felt like everything came together all at once?

DM-I wasn't very well in my late teens/early twenties due to mental health problems. Around that time music was all I had going on really, both listening and making my own. Even when everything else was looking kind of bleak, I could still have these little musical epiphanies which helped to make it worth getting through the day.I'm personally in a better place now but the wider world seems to be going to hell in a handcart, geo-politically speaking. Like a lot of people I find escapism in music (and the other creative arts) to be extremely helpful.

CMM-If you were able to do a soundtrack for a film director of your choice who would it be and what would the film be about?

DM-Tricky question! I'm far from an expert when it comes to film but I love a good soundtrack. 'Paris, Texas' is a favourite of mine so maybe Wim Wenders? Terry Gilliam? David Lynch? All pretty pie-in-the-sky of course! I could also imagine working for TV or maybe even animation would be good fun. As for a plot/theme... what about underwater dystopian sci-fi with surreal and existential undercurrents? In Claymation.

CMM-Any other bands/musicians in your neck of England that you recommend these days?

DM-If you're talking specifically Liverpool/the Wirral, I'd pick out Ex-Easter Island Head and their side project The Aleph for special mention. Forest Swords too - who I think is a bit better known on your side of the Atlantic. He was actually in my brother's class at school! Then there's a group called By The Sea. As for further afield, I really like Daniel Patrick Quinn, Hamilton Yarns, Field Music, Richard Youngs, The High Llamas... and so on. As pretentious as it might sound, I've actually been intentionally trying to listen to new music from different countries recently so it's very likely that some good, more local stuff has gone under my radar!

CMM-Any future plans for the project? Any upcoming tours or recordings?

DM-I think a tour would be a bit ambitious at this stage (probably need to get the word out there a bit more first!) but I'm definitely looking to play more live shows. I've got loads of new material that I've be working on so I'd definitely like to get at least another release out there this year. I've also been working with a band called Cartwheels on Glass which features members of renowned local acts Lovecraft and Organ Freeman. It's probably more conventional guitar-band music than my solo work but they're fantastic, inventive musicians so hopefully the songs and arrangements will stand out. Our leader Craig Sinclair has referred to the music as 'woozy Valium pop', which works for me! We've been playing a few live shows and are looking to launch some of our recorded material very soon too. There's no web presence yet but keep an ear to the ground...!

DM-Thanks for taking an interest in my music - it means a lot!

News From Neptune "The Cold Open" E.P. is available now as a limited cassette at www.custommademusicva.com and at www.newsfromneptune.bandcamp.com