"Earthquakes and Hurricanes" an Interview with John Dufilho of Clifffs 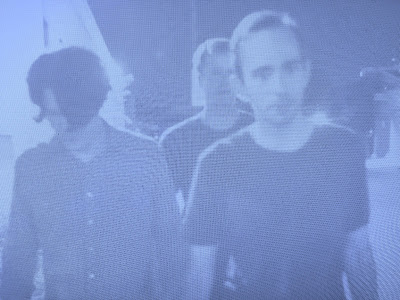 John Dufilho is one of the most prolific musicians you will ever find. He released five albums with his indie rock unit The Deathray Davies before becoming the drummer for psychedelic pop legends The Apples In Stereo. John recently formed Clifffs who's debut album "Bill You're Only Human" is a powerful collection of straight forward punk/rock n roll songs inspired by The Ranones and 60's garage rock. We sat down with John to talk about his earliest musical memories, touring the world, scoring films and making music with Clifffs.

CMM-At what age did you first discover music and what band made the biggest impact on you as a musician?

John - Most of my friends had older brothers. We listened to their music until around 4th grade, then I discovered The Ramones. it was the first time i felt connected with music and it FLOORED me. From there it went to the Clash, the Sex Pistols, all that... later i had the same experience when I went back and listened to the 60's British invasion stuff. There's so many amazing bands from that time.

CMM-What instrument did you first pick up and what were some of the first bands you played in when you were coming up?

John - Drums. I played with my friends in garages. The first band I ever played with was hardcore punk, we were called "Unwanted Children", the band lasted for about 2 weeks. We recorded in my room on a boom box. My friends Colin, Thornton, and I would try to play as fast as we could. I would give anything to have that recording now. I bet it's awesome.

CMM-So in 1999 you recorded some songs that led to the formation of The Deathray Davies. How did that all come together and how would you describe the world of "indie rock" in 1999.

John - I was just recording on my own, playing everything. There's plenty of instruments I don't really play well, but that's never bothered me one bit. I usually like it better when I'm not entirely sure what I'm doing. It's way more creative that way. Same goes for music i like to listen to. Indie rock, at the time, definitely had an element of this. Bands like GBV and Yo La Tengo.. but it's not much different from the Ramones or the Velvet Underground.

CMM-What eventually led to you joining The Apples In Stereo and what's it been like touring the world with them for the past ten years?

John - The Deathray Davies played a show or 2 with the Apples, then toured a bunch with Dressy Bessy (Apple gtr player John Hill's other band) they became friends of mine. They were looking for a new drummer after Hilary left in 2006.. and it immediately felt like a perfect fit. We haven't done anything in quite a while ("an extended hiatus"). Our friend and bandmate, Bill Doss, passed away and it just gutted all of us.. impossible to put into words. i know he'd like it if we kept making records and playing shows.. I'm hoping at some point we will again, as it was always an amazing time. Playing with them has meant the world to me.

CMM-Your new band Clifffs is a pretty bare bones to the point punk rock n roll outfit. How did the band get together and what was the song writing and recording process like for you guys debut album "Bill You're Only Human"?

John - We wanted to make the simplest statement. A few chords, a lot of energy. It's not an easy thing, making something so minimal. I'm super proud of our record.

CMM-How were the record release shows?

John - The release shows were awesome, really fun. We played with my fav San Antonio band, buttercup.. my fav Dallas band, Sealion.. and one of my fav performers, Laura Harrell. It was amazing to have all these people I admire around for the weekend. Great turnouts, lots of drinks.

CMM-You also have a project called Cantina with Jason Garner of The Polyphonic Spree plus several other records in the works. Give us a bit of info on Cantina and everything else you have going on.

John - This year is kind of crazy. CLIFFFS record comes out first, then Cantina (our weird little quiet/loud/folk/country/indie band) releases a record on July 23. Then Corner Suns (a psyche/pop recording project I have with Brandon Carr from the Earlies) comes out in the fall. I've got 2 other records finished as well, so I'm trying to figure out when to release them too. It seems I have an addiction to writing/recording. Jason Garner and I have been playing and recording together for about 25 years now.. He's my brother and we have our own language. He's an incredible musician- drums, bass, vocals.. he won't admit it, but really any instrument you give him, he rules. He's also a busy guy: drumming for Polyphonic and road manages Old 97's, so he's not in town to often these days, which is actually why i started CLIFFFS in the first place.

CMM-Outside of playing in bands you have been doing film and television scores. How did you fall into that line of work and what are some of the projects you have been working on recently? Any particular director that would be your dream to work with?

John - I have a daughter, June, who is 5. I decided, just before she was born, to try and focus on studio work, writing, recording.. making a living that way rather than being on the road. I've been scoring indie films, writing for tv, lots of different things. Right now I'm scoring a "modern western" with Judd Nelson. I've been mixing records as well. There's a guy named Doug Clarke that I just recorded and mixed a record for- he's amazing. Best songwriter I've heard in a long time.

CMM-Think we will see Clifffs venturing out of Texas for shows any time soon? Any other plans for the band?

John - I hope so. We've been talking with a few bands about touring.. we'll see. In the meantime, we're already recording our 2nd album. I have 12 songs written and demo'd up, so I'm excited about it. more, more, more!