"Five For Friday" with John Strohm of Blake Babies 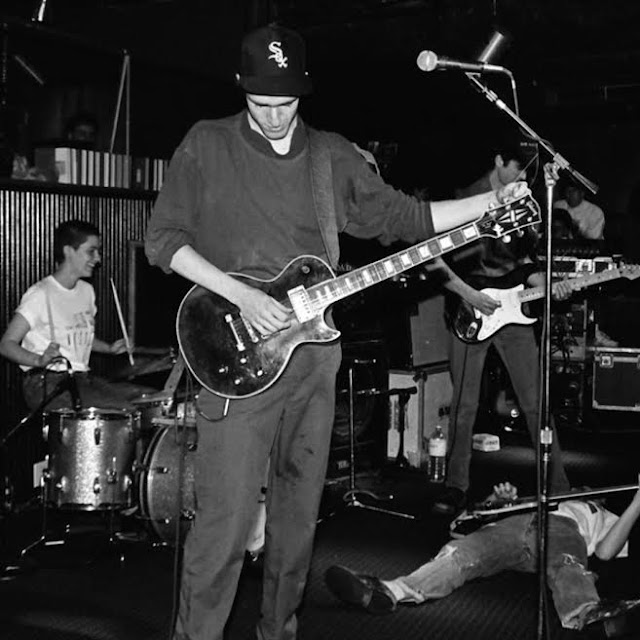 Blake Babies were an alternative rock band formed in 1986 in Boston, Massachusetts. The three primary members were John Strohm, Freda Love and Juliana Hatfield. In March of 1988 they entered Cambridge, MA's Fort Apache Studios to record demos of the songs that would become their 1989 LP, "Earwig". The tapes sat in a basement for close to 30 years before the band "rescued the recordings" remixing and remastering the sessions 12 tracks. A campaign has been launched via Pledge Music where fans can pre-order these "Earwig Demos" on vinyl. Visit http://www.pledgemusic.com/projects/blakebabies for all of the details on this project which will also include a few very intimate live shows. Guitarist/vocalist John Strohm shares some of his favorite songs from some of his favorite Boston area bands along with some amazing stories on how he discovered them in this weeks edition of "Five For Friday" but first enjoy the sounds of Blake Babies "Rain".

I moved to Boston from Bloomington, Indiana, after high school in 1985 to attend Berklee College of Music. It took me a few years to really find my place in Boston and get my band The Blake Babies off the ground. Eventually, however, we found an amazing community of like-minded musicians who influenced us enormously. Though it’s hard to narrow it down, here are 5 songs by some incredible regional artists that really helped me on my way during those first few years.

Juliana Hatfield turned me on to Volcano Suns around the time we met at Berklee in 1986. I’d been a fan of Mission of Burma’s Signals, Calls and Marches record but I don’t think I even really knew they were from Boston. Volcano Suns included one former member of MOB and a couple younger guys. We used to cover Volcano Suns’ son Jak at the earliest Blake Babies shows, but this was the song that really blew me away. A mid-1990s lineup of the Lemonheads I played in covered this song, and I’ve played it in my solo shows for decades. To me, this is an all-time classic.

My then-girlfriend Freda and I used to sneak into TT the Bear’s Place in Cambridge when we were underage. They used to serve food there, something called the Hoodoo Bar-B-Cue and we would go around 6:00 for dinner and just wait it out. The show started around 9, and by that time they were checking ID’s at the door but they would have forgotten to check ours. We saw a lot of great bands that way, but a few of them really blew me away. Dumptruck got sidelined by a legal dispute after the release of the album "For The Country", which included this track. But the lineup around 1987, when this album came out, was remarkable. Kevin Salem, the guitarist at the time, really influenced my playing. His solos had an element of barely-contained chaos that I tried hard to emulate.

My friend who lived in the apartment upstairs, who eventually recorded the first Blake Babies tracks, was a video artist from the Boston Film & Video Foundation named TW Li. TW kept a lot of cool art videos, which he would play for us on a massive ¾” video deck. He had this video around 1986 more as an art piece than a rock video, before this band from nearby Newport, Rhode Island signed to 4AD Records in London. I watched this obsessively in various states of altered consciousness. I could tell these people were no older than we were, and what they were doing seemed so far from our frame of reference or influences. Eventually we played shows together and became friendly, but I never stopped being intimidated by them. They introduced us to The Pixies, which opened up a whole new world of intimidation a year or so later.

So much of trying to play in a band in Boston in the 80s was about learning humility. In 1988 my roommate Marc had a label and his first two releases were by Galaxie 500, who actually opened for Blake Babies at an early show. A couple of friends from my hometown were visiting for that show, and afterwards back at our apartment one of them insensitively pointed out that we should have been opening for them. It stuck in my craw, but deep down I knew he was right. They were miles ahead of us. I got the references – I was obsessed with the third Velvet Underground album, which was clearly a point of reference. But it never occurred to me that a band in the 80s could actually reinvent that sound for the future. This track still sounds ahead of its time.

By the end of 1988 Blake Babies were recording our first real album at Fort Apache, a huge thrill. To save money we worked the graveyard shift, beginning around 7 or 8 and going until the wee hours. All of our favorite band at the time was Dinosaur (before the “Jr.”) from nearby Amherst, Mass. We’d seen them a few times at clubs, worn out their first two albums, and we’d at least become a little bit acquainted with them – though they were remarkably aloof. The Dinosaur guys were making their third album during the day shifts, and one day they were far enough along in the process to play us a song from the sessions. Sean Slade pulled up a mix to Freak Scene in the control room and turned it up to an ear-splitting volume. I don’t really think we ended up doing much work that night. In that moment it just seemed futile to even try.

Posted by Custom Made Music at 9:12 AM