"Five For Friday" with Seth Little of Hello I'm Sorry 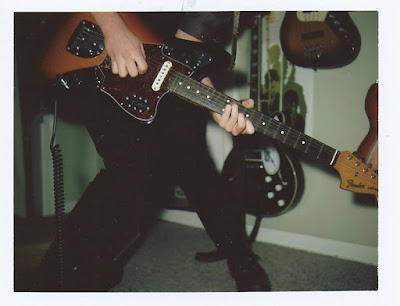 Hello I'm Sorry is the project of Bellingham, Washington musician Seth Little. His latest release "Benevolence" is an incredible collection of energetic lo-fi rock n roll that channels the spirits of Guided By Voices, Pavement and The Replacements. Seth shares some of his favorite songs in this weeks edition of "Five For Friday" but first enjoy his song "Home".

This song is just perfect in it’s own essence. Will Toledo’s lyrics such as, “I want to break something important / I want to kick my dad in the shins” are brutally honest and just put themselves out there in such a matter-of-fact way that it immediately grabs your attention. He’s being the opposite of pretentious, when, in my opinion, his music is some of the best indie stuff out there. There is no arguing this guy deserves way more attention than he’s getting, and it’s time people listen to Car Seat Headrest so that they can say to all their friends “Yeah, I liked him while he was still playing stuff off of Twin Fantasy”. Lyrically, and musically, Car Seat Headrest is a beautiful mess of some of the best sounds being recorded right now. I take a huge influence on his DIY attitude.

“Try Me Out Sometime” by BRONCHO.

This song just hits you in the face from the start and never stops moving. It’s a great idea that got executed perfectly. Ryan Lindsey’s voice is every indie pop artist’s dream, and it really shows in the rest of the album (Can’t Get Past The Lips). This song has such a momentum and sneering presence, it’s insanely inspiring. It makes you want to get up and run and kick and punch and just never stop.

I have a couple good friends in this band, making it so I listen to them with a more critical ear, but these guys continue to blow me away every time. They’ve got the skill and the voice, but more importantly the energy. Try to listen to this song without smiling, I dare you. They play all over the Seattle area and when you see them, it’s obvious they’re what every band should be – for friends writing awesome music, having a blast.

With a name like that, you obviously aren’t expecting a feel good tune, and Ease delivers that uncomfortable desperate feeling you have to get sometimes. It’s perfect for lying in your bed and staring at the ceiling way too late at night. It’s gotten me through a really weird time and I have no doubt can do the same for others.

Come on. This is it, what more do you want? Vocalist/bassist Chilli Jesson just screams what you need to hear in your face. The first time I heard it and every time after I get chills, this song is a stunning and colorful mess of everything that makes me excited about music and life. As long as this song is playing LOUDLY somewhere, there will always be that intangible bright and blue noisy energy you can’t capture but can only try. Palma Violets did that and that’s why I think this song needs to be heard by everyone at least once. It’s desperate and amazing and unexplainable.