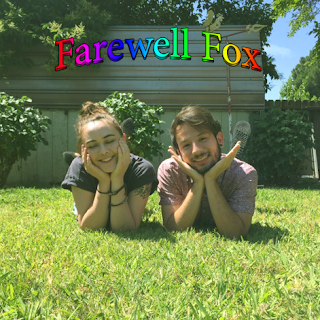 Sacramento California's Farewell Fox are one of the most unique bands we've heard here at CMM headquarters in quite some time. Made up of Erin Jordan on vocals, synth, and ukulele and Kevin Carpio on guitar, bass, keys, and drums the duo create a mind scrambling mix of art rock, punk and noise that's full of power and mystery. Erin and Kevin share some of their favorite songs in this weeks edition of "Five For Friday" but first listen to their latest single "Alone".

I had first listened to this gem a few years back through a friend, and ever since, I’ve been a huge Girls fan. Christopher Owens’ ability to capture the essence of growing up and heartbreak really shines through on not only this song, but also this entire record. The song opens up with such a powerful riff and when Owens’ voice comes in, it immediately takes hold of you and doesn't let go for the short remainder of the song, and when it finally ends, it makes you wish that it never had. What I find so endearing about this song is its ability to make me feel what the narrator is saying; comparing my own life to a former loved one’s, wanting the happiness that they have found and more.

My first instance playing music was because of this song, initially making it my first choice. After I had gone out and bought my high school best friend a ukulele for her birthday, she decided that she actually wasn’t interested in it at all, just knocking it around the house and practically trashing it. I thought, “Why can’t I mess around on it and see what I can do?” I just kind of Googled the “easiest ukulele songs” and somehow stumbled onto this one. When I was first learning it, I was supposed to bar the chords and also somehow sing and that seemed impossible. I ended up teaching myself how to play by moving the capo instead of my fingers and I sounded God-awful. The reason this song is so important to me is not only because it was the song that got the ball rolling for me to actually pursue music, but her raspy and soft voice was something that I somehow channeled overtime and I realized “Hey, maybe my voice does sound good! It’s pretty unique!” I consider Cat Power a very heavy musical influence, and also, this song is just so simple and innocent and cute!

How can you NOT love Modest Mouse? I mean, come on. The whole “Good News For People Who Love Bad News” album makes me feel some type of way. This song in particular, however, creates a joyous melancholy of irony and hopes, blended with a whole lot of bad luck. “Bad news comes, don’t you worry even when it lands. Good news will work its way to all them plans. We both got fired on exactly the same day, well we’ll float on, good news is on the way.” Isaac Brock takes his horrible luck and laughs in his own face, and that is what is really most inspiring about this song. There isn’t even much to say because he says it all! On a good or bad day, this tune always makes it better.

I’d first heard this song because my mom was listening to one of those Soul and R&B radio stations on TV. The first thing that caught me was the incredible bass line. It’s so menacing in the beginning and you can tell that something is brewing in the first few bars of the song. Then, right when you least expect it, that snare and crash come out of nowhere and Sly takes hold of the song. I love everything about this song. If I were a song, I would want to be this song, because it sparked my love for Funk and Soul. The instrumentation feels so stripped down and raw, and Sly’s voice is definitely a force to be reckoned with.

Kevin: I remember first seeing the music video for this song before I left for school on VH1’s You Oughta Know. I had no idea what I was in for. The opening sequence is by far one of the most heartbreaking and somber openers I have ever heard. It’s so beautifully composed and Mikel’s ability to captivate the listener’s ears with such incredible storytelling is absolutely dumbfounding. The entire song is one large emotional crescendo that builds up to the inevitable: an emotional breakdown. I can’t even begin to tell you how many times I’ve listened to this song on repeat. It’s truly a favorite for me.

Erin: Yeah, I’ve cried more to this song than to any other song before, so I would say it’s pretty good.

Posted by Custom Made Music at 9:40 AM