Rhythm and Noise: An Interview with Lauren Alves of Oblio 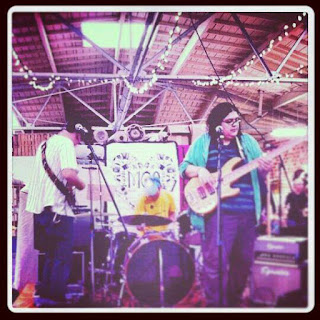 Oblio is a three-piece indie rock band hailing from Oakland. Since the bands inception in summer 2013, they have been busy composing and performing in the SF bay area. We sat down with vocalist/bassist/guitarist Lauren Alves to talk about her early musical experiences, the bands formation, and the making of their latest E.P. "Take Your Bitcoins To The Mission" (available now on cassette from CMM).

CMM-What's the first music that you remember hearing as a child and what music made the biggest impression on you at that time.

Lauren-Growing up in San Francisco afforded me opportunities to experience many different kinds of music, and as a child I was particularly interested in opera, as well as mid-80's pop (As I was born in 1984). I found the intensity of the operatic voice all-consuming and fascinating, and the radio provided plenty of mindless vocal melodies for me to sing along with in the car on my way to school. My musicianship was forged in two worlds, in a sense, classical and contemporary, and I draw technique and inspiration from both facets to this day.

CMM-How did the band get together and what went into making you all's distinct sound?

Lauren-David and I were playing together in a three piece when our third member abruptly quit due to a personal dispute with us. David and Marshall were playing together in a post rock band and we asked him to fill in for shows we had booked and he said yes. A few months down the road on July 4th, 2013 we celebrated our independence from our former member and Oblio was born.

CMM-You all just released a new E.P. called "Take Your Bitcoins To The Mission". What was the writing and recording process for that like?

Lauren-The music we write is very personal, and personally it can be painful. The ep contains songs about love and loss: love for former flames and the loss of affordable housing in the Bay Area. We recorded at Robot Envy Studios in Berkeley with Sammy Fielding (robotenvy.net) and had our tracks mastered by Bijan Sharifi (bijansharifi.com). We were very happy working with those guys. We were well rehearsed so we ended up recording all the tracks in one weekend. It was exhausting, but overall, it was a good experience. 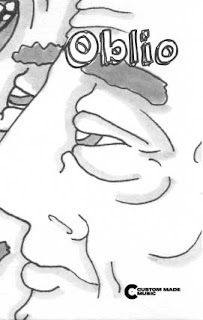 Lauren-I have a pretty large pedal board that I run through an Egnater Rebel 30. I typically run a Fender Strat with vintage noiseless pick ups thru a Kelley 4 knob compressor, Mad Professor Silver String Reverb and Swart atomic Boost. I also utilize a vintage Edwards Light Beam volume pedal and a Blackout Effectors Sibling OTA Phaser on the slow setting. Marshall plays a semi hollow body Ibanez Artcore through a vintage deluxe reverb. He uses an AC booster for overdrive, a TC Flashback,and tremolo. For bass we use a 5 string G&L through a pre-Fender SWR stack.

CMM-What's the current scene like in Oakland? Any stand out bands and venues you all can recommend?

Lauren-The scene in Oakland is pretty alive and thriving at the moment, but the scene is being threatened as we see many people being priced out of San Francisco, and then migrating to the East Bay. With this influx of artists and non artists alike, we know that it will only get harder to live in Oakland as an artist. . I made the move in 2009, and in the past 6 years the scene has seen many venues and bands come and go due to, primarily, income inequality and rising rents. One of my favorite venues, LoBot gallery in West Oakland is being threatened by a recent hike in rent. A lot of underground venues are drying up and closing in the Bay Area and it's depressing. Luckily, our artist community is strong and we will continue to fight for the right to live, play, and work in the community we live in now, and good bands in Oakland? There are so many I don't know where to start. Check out Cougar on a Meth Binge, Try the Pie (from San Jose but well worth checking out), Pharoahs, Brasil, and Cave Clove to name a few.

CMM-Have you all done many out of town shows and will we be seeing Oblio on the road in 2015?

Lauren-We have not done any out of town shows this year but we hope to tour the West Coast in early fall.

CMM-What does the band have planned for the coming months?

Lauren-In the coming months we are continuing to play locally in the Bay Area, as well as booking dates in early-mid fall for a West Coast tour. We are working on new material, as we always do, and we look forward to introducing new material at shows, so come and see us live.