"Five For Friday" with Esa Torkkeli of Silence Through The Rain 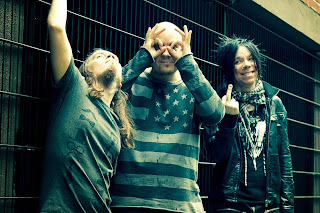 Silence Through The Rain hail from Kouvola, Finland. Their latest self titled E.P. is a promising collection of post punk, indie, and alt rock sounds. Vocalist guitarist Esa Torkkeli shares some of his favorite songs in this weeks edition of "Five For Friday" but first enjoy "Silence In The Rain's "Equilibrium".

Therapy? is one of my favorite bands. This cover was originally written by a band called Joy Division, which is also one of my favorites.I prefer this version to the original version and that is rare. It does not happen often that a cover version beats the original version.This one brings something else to the table musically and that is in my opinion the only good purpose to ever record a cover song.

Manic Street Preachers was one of the most important bands for me when i was growing up. This song is about the Spanish civil war and it was a number one smash hit all over Europe. That alone is an achievement in my books. a Brilliant song with brilliant lyrics. In my opinion they should have been one of the biggest bands in the world, but they are not. In this video they are ripping off chords from a guitar with a barcode reader. How cool is that? They have often been misunderstood and they have never lacked any self-irony.

After surviving the death if Ian Curtis, the remaining members of Joy Division decided to continue under the name New Order. Not only were they able to continue making fresh sounding music successfully. They did it with more commercial success than ever before.Blue Monday is still today the biggest selling 12" inch vinyl single in the world. Sometimes i still wonder what they would have sounded like if Ian was still alive today.

Björk for me has always been one of the greatest in channeling emotional intensity into music. Somewhere deep down inside of me there is a place that always resonates through her music. There are a lot of great songs i could have picked for this from her, but this song "Paegan Poetry" is one that´s stuck with me since i first heard it.The song in my interpretation represents agony of love and in the end learning to let go of yourself for solitude. It is a sad song, but there is always comfort to find in transcending sadness. It is a natural part of life. For me she is an artist in it´s purest form. Loads of respect.

Placebo - Every You Every Me

Placebo was one of the most influential bands for me growing up. Their earlier records feel like a soundtrack for the various moments in my life.This song in particularly is an important song in my life. Feels like a lifetime ago, but at the same time i remember it like it was yesterday.The emotional charge in this song is something that is over the top.

Posted by Custom Made Music at 9:07 AM