"Five For Friday" with Ricky Turner of Howling Cloud 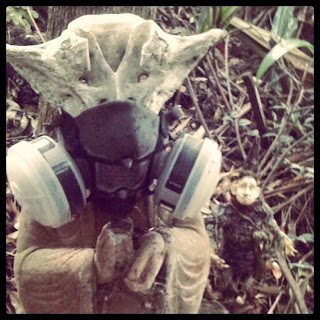 Headed by musician Ricky Turner, Mount Nebo, Australia's Howling Cloud are self described as "a balanced blend of sacred herbs, symbiotic micro-organisms and holy water, gently mixed together with respectful disregard of tradition, improvised mythology and a nod to the stars, then fermented for 666 years in ironbark vats for that earthy finish, Howling Cloud delivers subtle yet full-bodied frequencies with intoxicatingly aromatic overtones and warm low-notes somewhat reminiscent of tobacco." The latest Howling Cloud E.P. "Lucid Dreamtime" will be released as a limited edition cassette on CMM this Spring. Ricky shares some of his favorite songs in this weeks edition of "Five For Friday" but first enjoy his track "Enter The Everywhen".

Had to pick at least one track from my favourite local bands to include, and this is the one of many i chose. most of my favourite music is the kind that transports me somewhere, and this track takes me somewhere i like to go often. the whole album is great, dreamy and pop-ish, yet raw and psychedelic.

Grails - Stoned at the Taj Again

Just a good dose of what grails do. grails' music tells detailed stories without a lyric; somehow these stories move across various musical genres seamlessly and with prowess, and often more tangents than an afternoon daydream. 'Stoned...' is characteristically dark and moody but always with a sense of hopefulness, full of emotive momentum, but with enough room for hypnotising, subtle atmospheres

SCG are like magicians who've been possessed by the wild spirits their music conjures. they are uncomprimising artists, as challenging as they are alluring. space prophet dogon is on the more accessible end of the spectrum; sir richard bishop's guitar sounds as if it has a mind of it's own and he's only barely got enough control of the thing to hold on to the riffs long enough to perform the song, while Alan's unintelligible, emotionally stirring vocals express a power deeper and more funamental than language as we know it. with scg, you either 'get it' or you don't, and i definately do.

OK i couldn't help it, here's another local band. got into them when they were a noise/drone/experimental band, now they're writing more concise melodic tunes without losing the loose, wild energy that makes them what they are. the rest of the album is just as good, but there's something so irresistable about the lazy vibes and the sneering, gutsy riff that epitomises blank realm and 'brisbane-ness'

This is what it sounds like on 'the otherside', the ineffible made audible. there's something almost familiar about it, like the flicker of a 1000 year old memory....have we been here before? the first 20min of this youtube video is 'ziggy sitar...', but i recommend you take the time to immerse yourself in the rest. and I leave you on that note.