"Five For Friday" with Kevin Monahan of Kromo 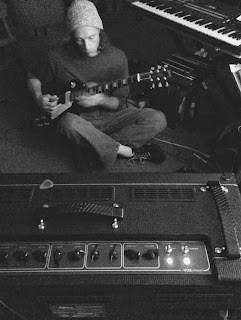 Kromo is the stellar recording project of musician Kevin Monahan. His guitar and synth based pieces are a beautiful combination of hypnotic and ethereal sounds that follow in the footsteps of artists like Tangerine Dream, Mike Oldfield and Aphex Twin. Kevin shares his insight on some of his favorite artists in this weeks edition of "Five For Friday".

Not for the faint of heart. Caspar Brotzmann plays some of the most insane, crushing guitar sounds I’ve heard to date. At times, I am completely dumbfounded with his technique. Sonic, booming low end sounds, with razor blade high end, played over a tight bass/drum rhythm with off-kilter time signatures. He generally keeps the construct to a simple three piece, stripped down to guitar, bass and drums. There’s no doubt in my mind that Caspar was definitely supplied with the ‘free jazz gene’ from his father Peter Brotzmann! But either way, he’s doing his own unique style. This is a track off his 5th album entitled “Home.” I’d highly recommend checking out the entire studio album from 1994 on the label Our Choice.

This band spawned during a time when crossover shows existed. It didn’t matter if a straight edge hardcore band played with a noise rock band, or a band with a metal sound played with an indie sounding band. Everything was just kind of called ‘punk’, and shows were mixed with a wide diversity of music. In my opinion, Iceburn is the epitome of this time frame. Coming from hardcore backgrounds, but mixing jazz structures with distorted guitar riffs, and extremely tight time signatures, founder, Gentry Densley (guitar) developed a following that still exists to this day. He still remains on top of the scene with his current band Eagle Twin. This track is from the 1993 album Hephasteus.

Secret hypnotic music of the East German Olympic Program!! Okay, it sounds kind of far-fetched, I agree! Either way, whoever wrote these killer kraut rock instrumentals earned their gold medal. These songs are full of perfectly created synth sequences, pads, and strong rhythm patterns with driving bass lines. Released recently in limited pressings (Volume 1 and Volume 2), and claiming to be unearthed from a vault from the 1970s. I haven’t found any proof of this, but the sounds are definitely the kind of synth tones heard on early Tangerine Dream and Kraftwerk LPs. So grab your warm up suit, and pump Kosmischer Laufer through your headphones. You’ll be increasing your broad jump in no time. This one is from Volume 1, entitled Sandtrommel.

The Italian band Ufomammut simply blows me away. A healthy slab of psychedelic sounds mixed with enormous riffing, all wrapped up in a 3 piece package, that has a mind bending effect to the listener. Masters of taking a repetitive riff or drone, and then creating an atmospheric layer out of it, and by the end you’re trying to figure out how the hell that happened!!?? These guys have been at it for quite some time, and it seems their music just progressively gets better. All of their albums are pretty much one piece of music, and can be quite addictive. This is a link to their 2012 album Oro: Opus Alter.

Evidently, this is a one man studio band. Matt Hill is the mastermind behind the project called Umberto. Fans of Fabio Frizzi, Goblin and Zombi, add this one to your list! Yep, that’s right, horror soundtracks done with eerie, heavy synth sounds over 70s style bass grooves! My understanding is that Matt Hill composed and played everything on his own in the studio. After an interest developed, he later assembled a band to perform these tracks live. This is Running Blade on “From the Grave” LP, from Burka for Everybody Records.