F.J. Desanto of Hypefactor talks about his favorite bassists 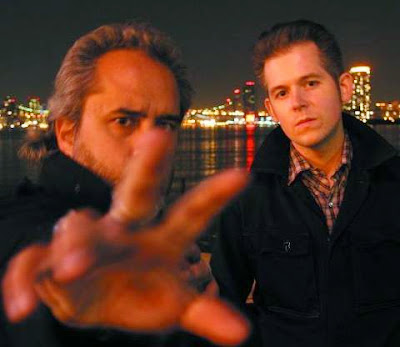 F.J. Desanto, bassist and one half of the LA/NYC based duo Hypefactor alongside band mate Brandt Gassman gives us the rundown on 5 of his favorite bassists and some of the bass lines they've created over the years. Hypefactor's brand new CD single "“市中心中国.”" is available now from Custom Made Music. Have a listen to the single here and enjoy F.J.'s discussions on his top 4 string wonders.

1 (+) Obviously, there are too many Peter Hook bass lines to choose from but I’ll list a few. He made me want to pick up a bass but believe it or not, it was neither a New Order song nor a Joy Division song. Hooky’s first side project REVENGE (along with his second side band Monaco), was for me, the greatest thing ever, and I was fortunate to see his only US tour in New York. I literally bought a bass the next day. So thus, the single from that record, PINEAPPLE FACE, deserves mention (despite the awful video):

However, since then I’ve spent my entire adult life trying to capture the moment I felt when I first heard New Order’s THIEVES LIKE US at the 1:50:

Revenge’s STATE OF SHOCK is without a doubt for some reason my favorite song the man has ever written:

You can probably hear something like that in Hypefactor, especially the stuff that’s coming out next year. I think I am finally getting close.

Honorable Hooky Mention to the obscure New Order b-side Sabotage, which is a near perfect song (especially at 2:37):

2. Paul Barker is the unsung hero/genius of Ministry and quite honestly industrial music as a whole. When everyone was programming basses he was writing bass lines that are unforgettable. SO WHAT is his defining moment. Smooth and menacing, it’s the first part I ever learned how to play. This video is where I first was inspired to buy a Gibson Thunderbird bass:

3. Though Andrew Eldritch hasn’t used a bass player live for the past 15 plus years, the beauty of the Sisters of Mercy albums were that they were all bass driven. This precedent was set by the amazing Craig Adams, later of the Mission, who absolutely kills it with my all time favorite Sisters song, BODY AND SOUL:

4. Because it wasn't a huge hit at the time, The Manic Street Preachers downplay their LIFEBLOOD album, but I actually think it’s the best. EMPTY SOULS is a lost classic and Nicky Wire is probably the most underrated bassist of his generation. Also, I love this great video which was shot in Berlin:

5. It’s easy to defer to Mani’s Stone Roses bass playing, but his game went up 10 notches when he joined Primal Scream. They let him off the leash and while ALL of Exterminator the album is perfect, the title track is the nastiest, sexiest thing he’s ever played. Listen to the chord changes, he is driving this song AND the band to an entirely new level. When Mani came onboard, they became one of the best live bands on the planet. Check out Exterminator:

BONUS: I would be remiss if I don’t include John Taylor from Duran Duran on this list. While I don’t remotely play like him, he is nonetheless influential. I could easily choose one of the hits, but I think some random album tracks, like AMERICAN SCIENCE are worth noting.

I would also mentioned that Charles Labarbara is a fantastic bassist who contributes to all of the Hypefactor records, but he is a massive pain in the ass so I won’t say anything nice about him and his great style and technique. He’s more the John Taylor type. I could do like 20 more of these, but I don’t think I’m allowed so enjoy and learn and thanks for reading.

Posted by Custom Made Music at 2:38 PM