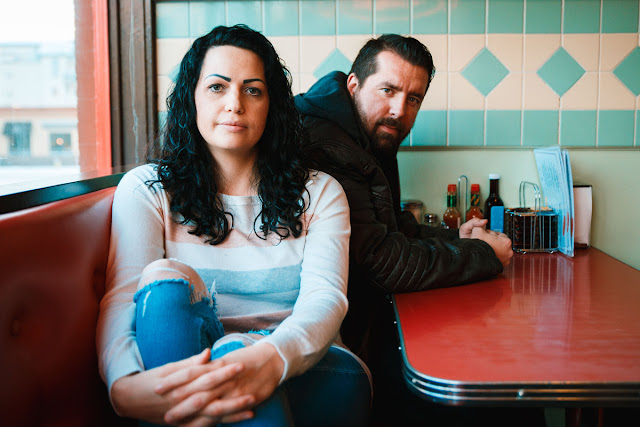 Whisper Suite is a husband/wife duo comprised of Nathaniel Sutton and Guylaine Sutton from Edmonton, Alberta Canada. Together, they bring a distinct style of sound, influenced by Sigur Ros, This Beautiful Mess, and This Will Destroy You. Nathaniel is an award-winning songwriter, producer and multi-instrumentalist, while his wife, Guylaine, is talented vocalist / percussionist.

During the glory days of Myspace in 2006, Guylaine was sifting through multiple artists in search of new music to add to her digital repertoire and eventually discovered a singer/songwriter by the name of Nathaniel Sutton. He was local and she was enticed by his sound, Guylaine decided to message him privately and declare her love for his music. It wasn’t long after, they had met for the first time in person and grew a relationship which inevitably led to the couple declaring love for each other in marriage on April 12th, 2008.

Since their beginning, they’ve experimented with playing music together and Whisper Suite is the structured outcome. You’ll become entranced by dreamy guitars filled with reverberation, harmonic vocals and a perfect blend of cinematic instrumentals. The debut full-length release,“Love Notes”, is written from experiences shared between the couple, each song expresses a story.

We sat down with Nathaniel to talk about what inspires the duo to make music, the recording and writing process for the album, their favorite film directors and the music scene in Edmonton. "Love Notes" will be available digitally with CD's coming from Custom Made Music April 20th. Enjoy the video for the albums lead single "Sun".

We've always shared similar taste in music and when we first met, we compared CD's, one of our favourite album's was "Little Songs" by David Usher. We were/are specifically fond of his song "St Lawrence River" and we were luckily able to see him perform that song live in our hometown. It was a very special night to us and encouraged us to create music together.

CMM-When did The Whisper Suite start and what was the inspiration for the musical direction you went in?

Whisper Suite has been just over a year in the making, we began writing in early 2017, taking inspiration from amazing artists such as This Beautiful Mess, Six Parts Seven and Sigur Ros.

CMM-How did you all come up with the name?

When we were thinking of names to call our project, the phrase "Whisper Sweet Nothing" came into the conversation. As we discussed further, we replaced sweet with a homonym and "Whisper Suite" was born.

CMM-What was the writing and recording process for the album like?

All the music for each track was written and recorded first. The lyrics and vocal melodies were written secondly to capture the mood of the overall vibe of each track. It was all recorded and mastered on our own at our home studio here in Edmonton, Alberta Canada. We were content with being able to write and record at our leisure, the creative process was a smooth process.

CMM-Any particular gear you all used in the making of it. (Guitars, pedals, amps etc)

The majority of the music was composed digitally, using the program Reason. It was used to record drums, guitar and synthesizer. We used the midi-based guitar, Jamstik to record the electric and acoustic guitar sounds. We used a Dean Custom Zone 4-string guitar for bass and used a Rode NT1-A to record the vocals.

Blade Runner & Blade Runner 2049 contain such epic compositions and would absolutely love to score music for the series, our instrumental track "Tough Love" is influenced by Blade Runner. In regards to your question, Ridley Scott or Denis Villeneuve would be the selected film directors. Our music seems to stand closer to the darker / moody side of the spectrum so a drama film would work best for us.

CMM-What's the scene like in your part of Canada? Any bands worth mentioning?

Our scene is a lively one, we are fortunate to have so many talented acts in our music community. Acts such as The Wet Secrets, Nuela Charles and Jay Gilday - just to name a few.

CMM-What direction do you see the next recordings moving in and what do you have planned for the months to come?

Our debut album "Love Notes" contains the distinct sound of Whisper Suite and we will continue to carry that sound forward in recordings to come. It's a sound where light meets dark, happy meets heartbreak. In the months to come, we are working with Custom Made Music to release our material physically on compact discs and digitally through Triple Pop Records. In addition, we will be performing at Weayaya Solar Powered Music Festival on July 7th, 2018.

Posted by Custom Made Music at 9:08 AM