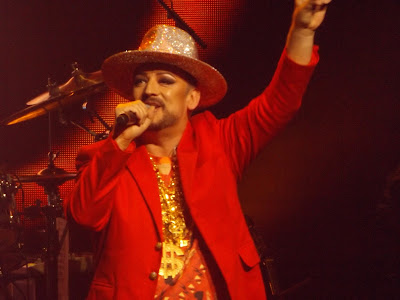 I was 10 years old in the Spring of 1984. Having become obsessed with Kiss just 5 years earlier I was now in the fifth grade and with the exception of having Van Halen's new album "1984" on constant repeat, I was also expanding my musical horizons by discovering R.E.M.'s "Reckoning" and "The Top" by The Cure. This was also a time when Culture Club where on top of the world and I thought they where pretty incredible. On April 25th 1984 they had a live concert special set to air on HBO. My family didn't have cable but I was excited when my Aunt and Uncle who my sister and I spent a lot of time with growing up invited us to their house that night to see what I knew would be an amazing show.

Earlier in the day while playing at a friends house I fell off my bicycle and broke my arm. Having experienced this injury just a year or so before I remember being surprisingly calm and was determined not to let it effect my evenings plans. I headed to the hospital, had my arm set and wrapped in a cast. Before I knew It I was all patched up and about to enjoy the show. I was floored by amazing performances of songs from their hit albums "Kissing To Be Clever and "Colour By Numbers" and despite my groggy and exhausted state it's a show I'll never forget.

31 years later I finally got to see Culture Club live. The beautiful Beacon Theatre on the Upper West Side of Manhattan was the perfect setting for the event. After a DJ lightly entertained the audience for roughly half an hour the lights came down and a montage of classic Culture Club news footage, photos and interviews was projected across the overhead screen. Soon drummer Jon Moss took to his kit and was joined by guitarist Roy Hay and bassist Mikey Craig. The crowd came alive as the iconic Boy George took the stage and the band launched into the Northern Soul based groove of "Church Of The Poison Mind". 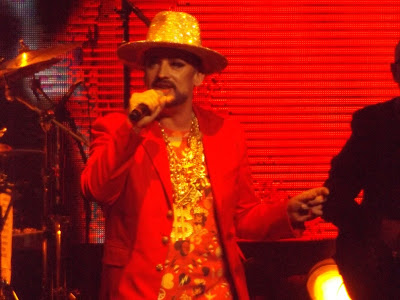 Boy George then thanked the crowd saying "It's so wonderful being here with you all this evening doing what I love to do most and that's performing" which set up a stellar version of "It's A Miracle" followed by the smash hit "I'll Tumble For Ya". The animated front man was in phenomenal spirits and his voice projected a sense of soul and power that really shined during a cover of Bread's "Everything I Own". Other highlights of the set include "Time (Clock Of The Heart)", "Miss Me Blind" a cover of Dave Berry's "The Crying Game" and "Do You Really Want To Hurt Me". 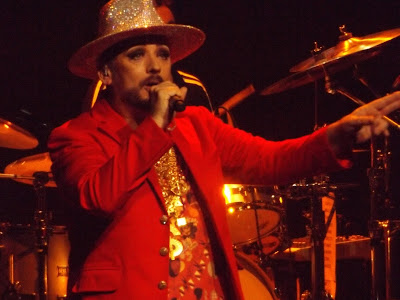 The crowd begged for more which brought on an encore that included rousing performances of "Runaway Train" and "Karma Chameleon". The band capped the evening off with a spectacular rendition of Bowie's "Starman" that sent the audience home happy. Boy George can still flat out sing and his energy and charm is second to none. The band sound as good as they ever did and it looks like Culture Club will be dazzling audiences world wide for many more years to come.

Posted by Custom Made Music at 9:01 AM