"Five For Friday" with Scott Padden of Pilot To Gunner 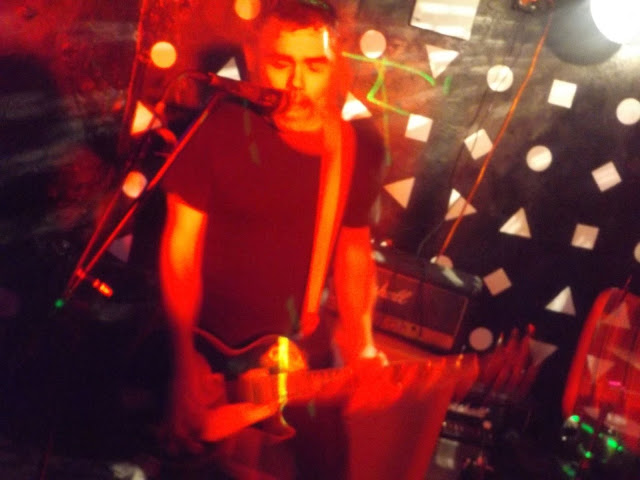 New York City based Pilot To Gunner have been making their own brand of melodic post punk since 1998 releasing three incredible albums along the way. I recently had the pleasure of seeing them live for first time in several years and they are as energetic and powerful as ever. The band will be recording a new album soon, with producer J Robbins behind the board. vocalist/guitarist Scott Padden shares some of his favorite songs in this weeks edition of "Five For Friday" but first enjoy PTG's "All The Lights" from their 2012 album "Guilty Guilty".

So when I was in school, I would sell CDs to the record stores for money to buy beer and records. I was looking through the 7inches at Tones Basement in Burlington, VT, and I saw a Jawbox/Edsel split. No idea why, but I bought it. I really don’t remember. Oh wait. It might’ve been a joint Dischord release? “Savory” is no longer even in my top 20 Jawbox songs, but that’s like saying that you took a non-mind-blowing bite of the mind-blowingest cake ever baked. So that split got me into both Jawbox and Edsel, because I was playing bass at time and the bass playing in both of those bands was just so, so, so good. When Marty joined the band, we handed him Jawbox’s “Sweetheart” and Edsel’s “Speed Hypnosis” records and told him to learn those songs and let them be his guide. He, at the time, would often get a beer at this bar on 5th, and this dude Jeff would usually be there after work as well. So after we gave Marty the CDs, he told Jeff about it. Turns out, and Marty had no idea, Jeff was the bass player in Edsel. And then of course we’ve had the incredible fortune of working with J, and I could write pages about that, about becoming friends with him and Janet, them being on our records, and HOLY SHIT I ALMOST FORGOT – the other day his son Cal told him PTG is his favorite band. I don’t care about anything else. That kid, and all the benefit shows in his name that took place all over the world, is living proof that the best aspects of the punk rock ideal are real.

“FAT LIP” – ROCKET FROM THE CRYPT

Drive Like Jehu would’ve been too easy here. When I worked at Warner Music, we’d trade CDs with people at other labels and “Scream Dracula Scream” was sitting in a pile in the fax room. Yeah, fine, fax room. I’m old as shit. Whatever. I knew that someone from DLJ was in RFTC but I also knew of RFTC vaguely, that they had a horn section and wore matching suits, and I was like, oh, they’re a joke band, a novelty band, ok, which is fine and I’m sure it’s fun and all, but that’s not for me. But then I was super bored one day and listened to “Fat Lip,” because I figured that it was probably the jokey-est song on there and I could be done with these guys once and for all. That is not what happened. I flipped out. It’s all I listened to for weeks. I grabbed Patrick and Kurt and the effect upon them was equally immediate. We saw Rocket every single time they played NYC after that. Patrick and I flew to San Diego for their “farewell” Halloween show in I think 2006? Rocket are all-time mushroom-cloud-layers who changed how we approach live shows. I demand that the crowd “give it up for the band” every time we play. Except it’s annoying when I do it.

Ugh, this is so embarrassing. But make fun all you want, I was a white kid in suburban Massachusetts, so I didn’t have any clue as to what was happening in NYC regarding Hip Hop at the time. I mean, I’m not embarrassed about loving RUN-D.M.C. or even loving quite a few Aerosmith songs, but not a huge street cred selection here. That said, Raising Hell was awesome and I went and ordered their first tape through the Strawberries at the end of the Kmart Plaza the next day. I hate when white dudes in rock bands call out Hip Hop artists as influences, which, to be clear, I’m not doing, because that would be an insult to RUN-D.M.C., I’m just saying that this song introduced me to Hip Hop. And, OK, while MCs like these dudes and Rakim and Nas and Guru and the De La guys didn’t directly influence me as far as writing lyrics goes, they did make me think, “I can’t half-ass this.” I could’ve lied and said KRS-One or Kool Herc or whatever, you know. But I didn’t.

I know I’m breaking the rules here by naming an album and not a song. I don’t even know what to say about this. About the impact this band has had upon me. Freshman year, I was friends with Patrick and Kurt but wasn’t playing music yet. They were playing together in the Arts Center at night. This record didn’t kill me at first, even though they insisted that I keep giving it another shot. Kurt said he’d give me 20 bucks if I learned all the bass parts. I bought a bass for 75 bucks and I think I used some of my book money to buy an amp, and in the process of learning the songs, I realized what this record was. I can’t claim to not have gone through a “Teenage Bass Syndrome” period, but this I think abbreviated it. Kurt never gave me the 20 dollars.

Here’s why: before I knew about bands that rocked the loud/quiet dynamic, I knew I liked big choruses, which, come on, like it or not, Van Halen knocked out of the park in their sleep. So they launched their choruses into orbit, always, but I always felt like the choruses should be louder. So when I would borrow records and dub them, I would bump the “recording volume” on my parents’ system for the choruses, so that they would be way louder than the verses. This chorus especially drove me crazy because it was this huge, awesome rollercoaster bouncey-castle party that just sat in this same valley that the verses sat in. You know? I turned it into that mountaintop Jesus statue in Rio. Or wherever. You’re welcome, Edward.