"Five For Friday" with Rob Menard of Absent Sound 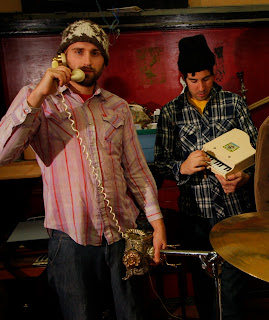 Winnipeg's Absent Sound are powerfully eclectic and engaging musicians, spanning from record skip world dub to heavy electronic post rock with eerie harmonies. Their new E.P. "Black Dots" is available as a limited cassette, from Custom Made Music. Guitarist/Vocalist Robert Menard shares songs from some of his favorite bands and best friends in this weeks edition of "Five For Friday' but first enjoy the latest video for the Absent Sound single "Meaniac".

Apse was a band that was so mysterious to me when I first heard them. So dark and tribal with spiritual space that resonates with me a lot! Every album is amazing and I was sad they broke up but then went on to create ERAAS! And I met and became friends with Robert the man behind it all when ERAAS came through Winnipeg.

Golden Tombs, formerly known as The Dead Letters, are quite literally some of my best friends! And they play some incredible dark spacey Mediterranean tinged spaghetti western. They take you on a spacey desert journey through ancient abandoned buildings and dusty canyons.

Again some of my best friends here, the 4 in Chorus Of Vs. have played either with me in bands or among us since the mid 90's. This incarnation is sonic and dissonant bliss with beautiful screamy poppy vocals. I can't get this song out of my head after hearing it!

I have become pretty good friends with Lee since meeting over the net 10 years ago. He showed interest in an event I put on called the 20 Guitar Circular Wall Of Angelic Sound, and we have been talking ever since. I was honored to meet him a handful of times and play guitar in his set here in Winnipeg last year. I love the amazing things he can do with a guitar!

Besnard Lakes have been good friends of ours since the beginnings of our bands playing together and hanging out throughout the years. Absent Sound had the honor to record a 20 minute trilogy in Jace's studio in Montreal as well. Besnard Lakes are one of those bands that can take me up and out into the stratosphere and float me there til they gently bring me back down once again an hour or so later. The sweetest harmonies you'll ever hear!