"Five For Friday" with Ballad Of Geraldine 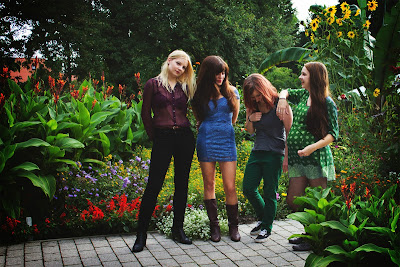 Ballad Of Geraldine play an intense combination of garage rock, grunge, psychedelia and pop. Made up of Mandy Einicke (guitar, voice), Tina Frisch (guitar, voice) ,Susanne Horka (bass) and Hannes Wilhelm (drums) their self titled debut E.P. is one of our favorites so far in 2015. The band share some of their favorite songs with us in this weeks edition of "Five For Friday" but first enjoy their song "What's The Deal".

Our music is inspired by this band and this song is one of our favorites. We really like the sound, which is full of contrasts with its calm parts and the minimalist and melodic guitar in the verse and the powerful chorus. Especially the using of toms during the whole song gives the song a very special dynamic which often tempted us on long a rehearsal to some drunk, high-spirited drumsessions.

Those two women create an unbelievable energy with only their drums and the guitar with its fully opened big muff. All of this is completed with the rough and powerful voice of the guitar player. This song is one of our favorites because it’s to the point and right in your face. It’s bolshy, dirty and a true rock’n roll song. When we were on a concert of them last year in Berlin, we suddenly turned 14 again, felt like on our first concert of our favorite band. We were just standing there and starring on these two rocking women and weren’t even able to dance. We were just like “Oh god, they are sooooo cool!!!!!”

Queen - Another One Bites The Dust

We LOVE to dance to this song. You can let out all of your emotions on the dancefloor. In later hours in our rehearsal room this song has a big potential to get played again and again and again and it doesn’t matter how often you play it – it always gets even better and better. Respect to the bassplayer though.

We opened with a song with a lot of tomplaying and we end with one. This is a perfect song for riggle through a fucked up, crowded and smoky club to the bar for ordering this one drink too much. At the bar you smoke a cigarette and just listen to this deep, dark and wicked song.

Posted by Custom Made Music at 7:22 AM