Dolly Parton Honored as Musicares "Person Of The Year" 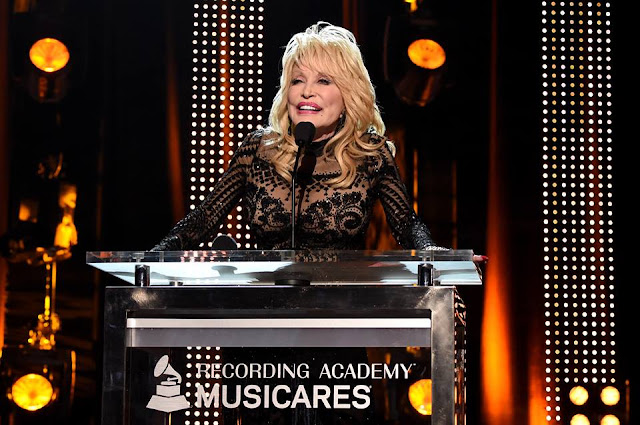 On February 8th some of the biggest names in music including Pink, Willie Nelson, Miley Cyrus, Brandi Carlile, Kacey Musgraves and others honored the legendary Dolly Parton as Musicares "Person Of The Year". The annual gala and concert took place at the Los Angeles Convention Center and kicked off Grammy Weekend in fine form. Musicares provides a safety net of critical assistance for music people in times of need and the event raised nearly 7 Million Dollars for the organization.

“I wanted to thank you for this night,” said Parton. “I truly am honored to be the MusiCares’ Person of the Year. And, the first country music artist to be honored. That’s a great honor.”

Parton was recognized by the Grammy Foundation and Musicares for her Imagination Library program which is a book gifting program she started in 1995 that mails free, high-quality books to children from birth until they begin school, no matter their family’s income.

Dolly explained...“I started that program because of my dad who could not read nor write,”. “But he was one of the smartest people because of that. But, it was kind of crippling to him. I’ve often wondered what my daddy might of been if he had been able to read and write.” She continued “When I started it, I thought it was going to just be in our home county, maybe a couple of counties over but it turned out that we took it all over Tennessee and it went on into Canada, and now we’re all over different parts of the world.” Pink started off the night with a stunning version of "Jolene", while Brandi Carlile and Willie Nelson quickly followed with “Everything’s Beautiful (In Its Own Way),” which Parton originally recorded with Nelson in 1982. Other highlights included Don Henley and Vince Gill teaming up on “Eagle When She Flies", Norah Jones rendition of "The Grass Is Blue" and Yolanda Adams powerful version of "I Will Always Love You". Dolly closed out the evening with a heartwarming performance of "Coat of Many Colors" accompanied by producer/songwriter Linda Perry on guitar. It was truly a tremendous evening for everyone in attendance.