"Our Time Is Now" an interview with Twilight Fields 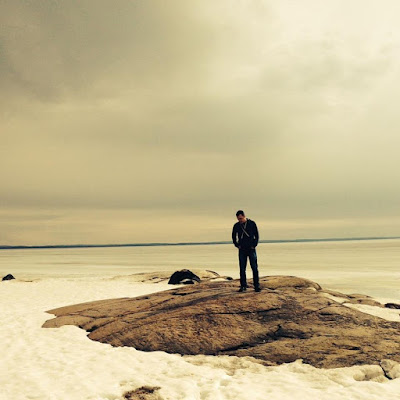 Twilight Fields is the brainchild of Canadian musician Allister Thompson. His blend of "ambient rock" with influences from progressive rock, ambient, dream-pop, psych-folk and shoegaze is some of the most intriguing and dynamic music you will hear anywhere. We sat down with Allister to talk about what inspired him to start the project, his earliest musical memories and the process of making his latest album "Our Time Is Now".

Allister-Probably the first thing, other than listening to two weird British musical singing pigs named Pinky and Perky, was discovering my parents' worn-out copy of A Hard Day's Night (the LP) when I was about 7 or 8 and playing the crap out of it. But to be honest, when I was thirteen and suddenly developed a huge interest in rock music, I developed an obsession with The Police! I had all their tapes, Sting's solo albums, and even tried some Andy Summers solo stuff as well. I was really into it. I can't say that band is an influence on what I do now, though.

CMM-When did Twilight Fields start and what was the inspiration for the musical direction you went in?

Allister-I used to make music similar to this back in the early 2000s, under my own name; sixties-influenced psych folk mainly. I took a long break from my own music to play in friends' bands in the 2000s, which toured and kept me busy. I then made a solo album, Shadowlands, in 2009 and started The Gateless Gate in 2012 to make instrumental ambient/Krautrock. I had no intention of getting back into the pop singing game after that. But I knew that my skills had gradually improved and that I had a lot to give still, especially lyrically. I was partly inspired, frankly, in 2014 by discovering the music of a band called Anathema. They're a former metal band, but they now make this beautiful, emotional, cinematic music to a pretty sizeable audience. Just amazing music. Basically, it hit me like a thunderbolt, like hearing exactly what my future could have been if I'd stayed the course and kept making the kind of music I had started doing. That really inspired me to get back to saying things that I thought were important, no matter now earnest it made me sound. Mind you, I'm not saying Twilight Fields really sounds like Anathema; it's more of an intention.

CMM- Also what made you choose the name Twilight Fields?

Allister-Twilight Fields is the title of an album by one of my favorite musicians, Stephan Micus. It's apparently also the name of something in a popular video game, but I wasn't aware of that before using it.

CMM-What was the writing and recording process for "Our Time Is Now" like?

Allister-I like to come up with an idea of what I want to say...not necessarily "concept" albums per se, but I'm album-oriented. So there was a general vibe I wanted to give off, in this case about unconditional love, so I had that in mind the whole time. I list off some topics I'd like to write about. However, I generally come up with musical ideas first, build those up, then work on lyrics and melodies last. I am the entire band, so I basically just layer things as the mood strikes me.

CMM-Any particular gear you used in the making of it. (Guitars, pedals, amps etc)

Allister-Since it's a one-man project, I don't have a lot of gear-head stuff to say. I use a really good acoustic guitar by a Canadian manufacturer called Larrivée. I have a hollow-body electric guitar, the Ibanez Artist, that I've had since I was sixteen. You can make it sound like anything, really. I've had all kinds of name-brand electrics and sold them all. And my bass is a vintage 1982 Peavey T-40, once endorsed by Ross Valory of Journey! It's so heavy, you need a special elasticized strap to wear the damn thing. But it sounds as huge as it weighs.

Allister-I'd love to do something for Herzog, like Popol Vuh used to do. Documentary, drama, anything!

CMM-What's the scene like in your part of Canada? Any bands or venues worth mentioning?

Allister-The scene outside of major cities in Canada went downhill for a while but is reviving with the enthusiasm of younger bands. There are a couple of good small-scale indie festivals in our town now, and some bands do come through. The local talent is good, as far as I've heard, but it's been a while since anyone got famous in the music industry from this area...I think. Since this is currently a "studio" project only, I haven't played the local scene. My history with gigging and touring all took place when I lived in Toronto, Canada's largest market. I moved here for peace n' quiet!

CMM-What direction do you see the next Twilight Fields recordings moving in and what do you have planned for a follow up release?

Allister-I do have a concept in mind. I used to write a lot of heavy material (mood-wise) about war, climate change, animal rights, all sorts of topical stuff, before turning inward to more philosophical stuff with Twilight Fields; I felt that I needed to express those more positive, personal things. However, if I have a chance, I have ideas for an album that will draw upon the same genres but be much harder-hitting, lyrically. I do not like the things people have done to the planet and to each other, not one bit, and I might have a few more things to say about that! So hopefully I do end up making that album.