"Five For Friday" with Scott Helland of Frenchy and the Punk 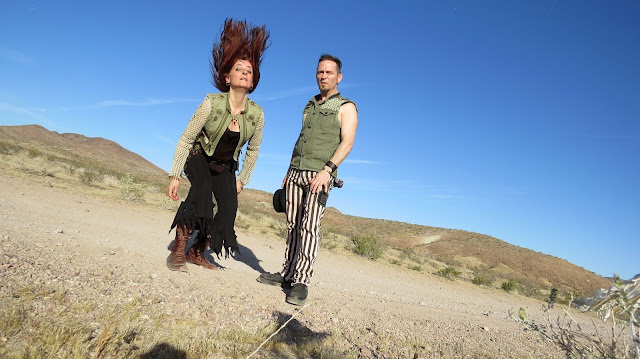 Formed by Singer/Percussionist Samantha Stephenson and Guitarist/Drummer Scott Helland, Frenchy and the Punk are a cauldron of foot-stompin' bohemian cabaret folk, world, French chanson, punk energy, dash of vaudeville charm, steampunk flair and pixie spirit. The band will be on the road for much of 2016 in support of their latest album "Bonjour Batfrog". Scott shares some of his favorite songs in this weeks edition of "Five For Friday" but first check out the bands latest video for their song "Fe Fi Fo Fum".

I only heard about these guys because someone sent me an email saying one of their songs sounded a lot like one of my instrumentals so I checked them out, plus I have a soft spot for duos. These two play rhythmic rock based flamenco, they obviously grew up on metal which is fine by me. I love the attack on this one. One thing I’ve always done since I stopped playing in punk bands with loud distorted guitars is to try recreate that power with just an acoustic guitar through writing, riffing and arrangement. This song has that as well, only with nylon string guitars. Beautiful playing on this

This is by the late great (mostly) acoustic guitar instrumentalist Michael Hedges, though he does sing here. He gets lumped into the New Age genre a lot, and I’m not sure that is entirely correct. I love the feel of this song, the acoustic and electric parts mesh amazingly well together. I love the low ’torched’ vocal refrain at the end of each chorus. He changed the way I thought about acoustic guitar. He just blew it wide open and shows there is so much more that can be done with the instrument than just strumming. What i took from that is to just develop your own style by doing what moves you and not trying to do what fits the normal perceived view of a instrument or style of music.

Amanda Palmer - Runs in the Family

I love how unrelenting this song is, she’s such a powerhouse. Punk with a piano, and a again I like the idea of creating that punk energy with an instrument that you don’t normally think of for heavier music. Of course a lot of it can be just attitude, but just hits me, and I like that.

Motorhead - The Chase is Better Than the Catch

Classic record, great sound, great songs. They were totally authentic. Motorhead bridged the gap between punk, metal and hard rock like no one else. They have so many classic songs, but I picked this one because it was the first Motorhead song I heard when I bought the record in 1980 and it blew my head off. I hadn’t heard anything like it back then. The sound of the guitar and bass are like an revving engine... which goes conceptually. Simply powerful, powerful simplicity. Groundbreaking literally (almost) and figuratively.

Great layered guitars, bass and keys on this melancholy Cure song. The song kinda envelopes you like a warm blanket. That’s the power of it. Great to listen to if you’re depressed about a relationship and want to feel even more down. It’s about the company you keep. They have that ability to create this mood that is expansive and deep. The Cure are definitely a big influence when it comes to writing guitar melodies, where as bands I loved and grew up on like the Ramones, Motorhead and Siouxsie influenced me more in attitude and drive.

Posted by Custom Made Music at 8:27 AM