"Five For Friday" with Fine Animal 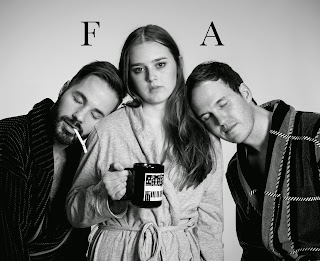 Columbus Ohio's Fine Animal have been one of our new favorites here at CMM headquarters in recent months. Made up of vocalist/Keyboardist Lucy Oaks, guitarist Kelan Gilbert and drummer KC Wilder the band make beautiful and captivating dream pop songs submerged in shimmering electronics and lush reverb. Their debut album is slated to be released later this Spring. The band share some of their favorite songs in this weeks edition of "Five For Friday" but first enjoy the video for their brand new single "Lay Awake".

Every once in a great while, the human ear connects with vibrations in the air we call sound. Sometimes these vibrations are composed in such a divine way that the end result can only be described as "perfection" To us, LCD Soundsystem's "Someone Great" is such an arrangement. It's one of those rare specimens where even after you've listened to it a hundred times you'll always find something new to admire about it each time you put it on. It's a song that seems to always act as the soundtrack to this silent film that sometimes runs in my head. A film that always consists of my most cherished friends and fondest memories. It's as if by listening to this track I pay tribute to everyone I've ever loved or lost. I feel like me [Kelan] and this song are like an old couple that will still laugh at each others jokes even though we've heard them all before.

If I ever find myself in a situation where I feel my my coolness and swagger are in question, I try to mentally channel this song and apply to my overall attitude and demeanor. So needless to say this song is on a steady mental repeat for me. The "cool factor" is something AIR has always seemed to effortlessly tap into. Despite discovering the album "Moon Safari" as an even more confused and awkward teenager I was still able to recognize it as intelligent music. "La Femme d'Argent" has one of those hypnotic qualities that seem to always invite me to a place of absolute serenity. The song title translates to "Silver to Woman" and I dare say the song itself is a sort of musical dream girl. Smart, sexy and delightfully mysterious.

Speaking of dream girls, how do you begin to describe St. Vincent... It's almost as if Annie Clark is more of an idea or way of life than she is a person. "Digital Witness" is just one of many of her works that Fine Animal love. We don't always share the same influences and but we can always agree on how fantastic St. Vincent is. "Digital Witness" certainly encapsulate just how brilliant she is. With a message that plays on the monotony of modern living, the song is anything but bland. From the punchy horns to that signature awkward funk that is St. Vincent this song is one of our more recent favorites. It's almost as if she time traveled into the future and learned how to play guitar and came back to 2015 to save us from boring music.

My Bloody Valentine - "Only Shallow"

I once heard My Bloody Valentine described as sounding like a mermaid jumping into a blackhole. I couldn't have said it better myself. "Only Shallow" offers so much intensity and emotion that it's hard to put into words how exactly this is achieved. Sometimes music transcends a linguistic description and MVB certainly has a flair for the transcendental. I often reserve MVB for long flights, car rides or anytime I can cozy up with a pair of nice headphones and just truly listen. It's the kind song of where I feel like I dishonor it by listening to it outside of situations where my attention isn't completely devoted to strictly listening to music. If MVB is shoe gaze royalty, consider us their humble subjects.

So if Fine Animal had a favorite band, Pinback might very well be it. We tend to wear our musical influences on our sleeve. However, it may surprise some to hear that Pinback has probably had the most notable influence on our sound. In the very earl days of Fine Animal, Kelan and KC had the chance to see a Pinback show together. There was a mutual feeling after the show that their musical footsteps were ones we wanted to try and follow in. The tandem vocal poly-harmonies interlaced throughout "Fortress" never fail to get us really excited. If you've ever listened to our music, you'll notice we're also quite big on have multi-dimensional vocals. "Fortress" has such a "fit" song structure, it takes and uses only what it needs yet delivers beautiful and intricate layers of sound. Thank you Pinback, don't ever change.