Five For Friday with Jonathan Adjemian of Hoover Party 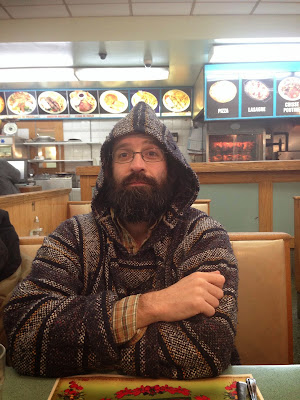 Jonathan Adjemian mostly plays things with keyboards - pianos, organs, synths, laptops. His solo work as Hoover Party covers the lounge music --> noise music continuum; lately he's been really enamoured of sine wave drones. Like many people, he moved to Toronto "temporarily", which has turned into 14 years so far. Here Jonathan shares some of his favorite songs from a very diverse group of Canadian musicians in this weeks edition of "Five For Friday". But first enjoy this beautiful track from Hoover Party. You can listen to more of Jonathan's music at hooverparty.bandcamp.com

Jennifer's music feels to me like the best expression I know of here and now. Realism in the sense that it's obscure and transparent at the same time, with facts, images and feelings mixed together. She has a poetics that sticks close to things & everyday life while still being evocative, musical, transporting. I find it hard to escape switching between a semi-despairing close-to-things and a detached fantasy - here Castle's a challenge and an inspiration. She's been a real model of a solo performer for me, as well -- her shows have these unsteady arcs, always unpredictable and controlled. She works in pretty set forms, but every detail (musically & lyrically) is up for negotiation. This song, I think, came up in response to the plan to build a city-sized open-air quarry a little north of here. I read this song as reacting with no false hope, no escape into dreams or blindered everyday, and no freakout. Difficult stuff. Music as schooling & steeling.

Doc is a neighbour and a loquacious talker and historical repository of psychedelic music details. Musically, he's a sound sculptor. This record is a "guitar" record; it has a "keyboard" pair in "All Is" and a song-based partner in the pipe -- but across the board he's working in seizing, loosening, massaging attention. He's done some touring in the MV/EE world, a nice little international scene removed from the macho posing bullshit that still hangs onto guitar music (among other musics). This record came out on Healing Power Recordings, one of our own local anti-bullshit treasures: Wolfgang and Victoria have done a lot not just to put out good music (and make some of their own) but to swing the focus onto what matters: making beautiful spaces where innovation is exciting and encouraging. Doc's bungalow lifestyle and dedication to endless jams in all their forms is another way of distancing from the business model on offer for non-music-school-oriented-musics, where the music exists to sell booze. We can get our own damn beers, thank you. Music as self-direction and drift.

There's a lot on this record -- a sonnet, a bunch of latin chanting ("go to the ant, you sluggard") over field recordings, and the title track, a thumping ode to gentrification and the liars who drive it (Richard Florida, that "poisonous mushroom"). Matt Smith has made a lot of different music, including some beautiful vocal work, and a lot of strange & varied stuff for theatre, but this one represents what he's been most busy with the last couple years: making people dance to a healthy number of overlapping rhythms. I'm not awfully rich in social graces, or skilled with the dance rhythms, but this stuff is important school for me (as well as a delight to move to). Music as a technics, shifting and blending the polyrhythms that make up our bodies. This has the added treat of Brodie West strutting the sax licks he picked up backing up Getatchew Mekuria. (Brodie can stand in for a big scene of great improvisers in town, who don't seem to be very well documented on YouTube). Dance or drone can go for a pure steady regular state, but I'm more interested in music that plays with that, tweaks and surprises inside the steadiness-- cue Nifty. Music as rewiring.

I'm a sucker for pared-down things, and this is a pared-down supergroup. Isla's songwriting already strips things down to the bare minimum, to really let it be about sound; and these voices blending together (all do good things on their own) have been a real treat over the last while -- the combo ranges from trio up to this full-on version. Those intervals! Isla's choice of sounds and the way her voice moves are both pretty good inspiration for working with sine waves. Vocal music can bring out what sine waves do too -- that a harmony of fine-tuning can have as much richness as one based on wider spacings. (There's something in this about where "intuitive" math and "calculative" math meet up - and both need to be developed through hard work and good listening). Music as slow transformation.

Andrew Zukerman (no C) is another super-skilled technician. I like to watch his shoulders or his wrists while he's working his samplers and tape recorders and other objects. He also always manages to have this kind of distance between himself and his gear, so he could jump away instantly if the situation required it (or lean away from his jokes, which happens a lot). That distance is probably part of being a collage artist (sound and also image, also just made a great collage film with Winston Hacking) in the "old style" -- two parts the surrealist -> musique concrète lineage, two parts weird jokes. He has a recent LP called "Soliloquy for Lieven" (tribute to the Dolphins into the Future guy, who's amazing) that's less collage-y and a little more static, and wonderful. I enjoy the split attention (sucker for that, too) that Andrew's music gives me -- between paying attention to long-form structural things, individual sounds, funny details, thinking "if only he'd just do it this way", etc. Music as life sculpture accident.