Five For Friday with Lauren Alves of Oblio 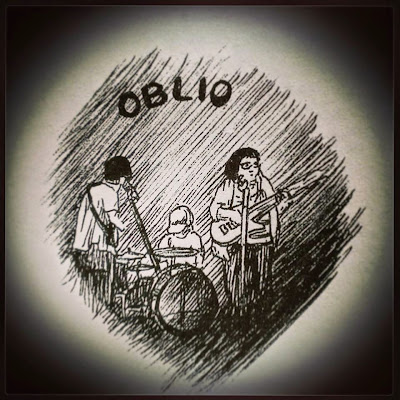 Oblio is a three-piece indie rock band hailing from Oakland. Since Oblio's inception in summer 2013, the band has been busy composing and performing in the SF bay area. What started as an offhand idea has turned into a novel sonic catalog of matters of the heart. Oblio creates songs that earnestly depict the human experience: loss, joy, hope, and above all, love. Lauren Alves who handles Bass & Vocal duties in Oblio was kind enough to share some insight on five of her favorite bands for this weeks "Five For Friday" feature but first take a listen to Oblio's track "Motel 6" which is featured on the Fall edition of the CMM sampler.

Burn Your Fire For No Witness is a rather haunting album, rife with melodic components that blend together to create an errily beautiful harmonic soundscape. Olsen’s vocal prowess is a force to be reckond with; her wickedly beautiful voice cuts through dissonance to create a composition rich in emotion. White Fire, the 4th track off of Angel Olsen’s most recent release displays a very unique utilization of melody and is quite an ode to romanticiscm. Olsen is currently touring Euorope and has plans to tour the US in the fall. Check her out live if you can because you wont be disappointed.

Together Pangea is an indie band based out of Los Angeles. Their latest album Badillac is one of our favorites. Badillac is a seemingly simple song but it is executed very well. It is the nuances in their performance that makes them shine quite brighter than the average.

Blood Sister "Why Would You"

San Francisco based Blood Sister is a dreamy, synthy, crunchy ode to the noise pop sound. There is a dark side to their music; with its driving drums and creamy synth tones, Blood Sister creates luscious dissonance that is sure to please. Blood Sister are releasing a new self titled EP on September 30th. "Paralysis" is a great track off that EP. It's available for preorder on iTunes.

Brasil "Drunk At The Controls"

Brasil is an Oakland based rock band that is sure to please with its witty lyrics and thundering guitars. After releasing an album in the fall of 2013, Brasil has recently released a live album of covers of the band Pavement. You can stream the live album at Brasil's bandcamp site.

The Bay Area based songwriter Ash Reiter released "Hola" in the fall of 2012 and the album does not disappoint. With luscious vocal harmonies and a tight rhythm section, this album will please. "I've Got Something I Can Laugh About" is a catchy surf pop tune that makes you want to dance; it's quite reminiscent of 50's doo wop. Ash Reiter is currently working on a new record so stay tuned.